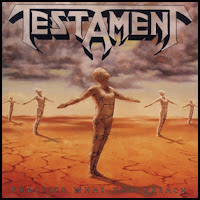 I can't speak for your neck of the woods, but as a teenager here in New England suburbia, the buzz over Testament's third album was fucking enormous. Everyone from fellow high school metal nerds (-heads, I'm sorry folks, -heads), to magazine critics, to guitar magazine snobs, to radio personalities was hyping the living shit out of this thing, and why not? Clearly the Californians had offered us ample proof of their potential up to this point, with two flawed but fantastic records. More than one individual spoke of this band as the 'next Metallica', the band that would go absolutely batshit viral the world over, securing every instrument sponsorship available to them, and having mullet haired axe masters frothing and masturbating to their new manGod Alex Skolnick...

When it finally landed, a few days before my birthday in 1989, I was elated, and couldn't wait to head over to the mall and pick up a copy. I was not disappointed. In fact, when I think back on the Practice What You Preach, it really does feel like an album that deserved a large share of its hype before and after release. No, it's not a perfect thrash record, and no, it's not superior to either of the full-lengths predating it, but this was a damn fine effort which further magnified the scope and aim of Testament's artillery, while at the same time finally managing to cross the threshold into a more timeless production standard. Once again the band worked alongside Alex Perialas, but everything here, through whatever technical advisement/advancement seems far better balanced, in particular the guitar tone, which is given a crisper embellishment that no longer feels stifled or over-processed. This album has more or less something for everyone, whether that's 'the ladies' (more on this later), the guitar diehards who enjoyed the semi-surgical precision and guitar gallantry of The New Order, or the mosh police who need oh so much of that sweet home chuggin' to cope with reality.

There are some admitted differences here from the sophomore album, in that there is less of an overwhelming use of atmosphere and melody to stage the more aggressive rhythm guitars. Many of these cuts thrived on their nature as mid-paced, straight thrashing numbers which were well suited to an audience inundated with the likes of Anthrax and Exodus. Don't get me wrong, there is plenty of musicianship here, and no shortage of ideas which manifest in a very clean, clinical use of biting harmonies and innovation, but Skolnick and Peterson spend much of the playtime in cruise mode, allowing Chuck Billy's most melodic vocals yet to carry the thunder. Another surprising turn is Greg Christian's bass, which is really brought out to the fore with a popping, almost comical tone that feels like a train of drunken, fat bumblebees heading home from the honey bar after last call. You'll hear this everywhere, both in places where he's alone (the "Perilous Nation" intro) or clinging to the rhythm guitars for dear life ("Practice What You Preach"). This actually reminded me of how Anthrax handled the low end on their 1988-1990 records, but I liked it better here.

For the first 35 minutes of this album, the first seven songs, I was completely on board with the writing, and it seemed like there was no end to the riffing goodness, mighty chorus progressions all feeling distinct from one another without any loss to consistency. I love nearly every moment, from the lead sequences, to Billy's harsh aural invective, to the great setups like the clean picked intro to "Sins of Omission" or the thundering inauguration to "Envy Life", above which Billy gives us an early death growl (a style he'd use more often in the 90s). This all grinds to a halt with "The Ballad", Testament's first attempt at a "Fade to Black". Billy seems a little acidic with his singing range, and aside from culling the wimpier hard rock audience who might have found The Legacy or The New Order too impenetrable, I really don't see any need for this. Until it gets heavier, the song is pretty much shit; so naturally it wound up being pretty popular; but I could have lived without it. The "Confusion Fusion" instrumental finale is a nice bit of tech-thrash, and "Nightmare (Coming Back to You)" is an appreciable stormer, but really the flow of the album is gimped by the time they arrive.

Though a few of the ensuing Testament records might have charted higher (I won't count Formation of Damnation or Dark Roots of Earth since the sales standards are far different these days than they were in the 80s when most people still bought music), Practice What You Preach always felt like their best chance at a 'breakthrough', with solid video rotation for both "The Ballad" and the title cut. Naturally, the success of this brought on some derision and divisiveness from the fans, but apart from about 2 minutes of that one song, this is hardly the 'sellout' some might paint it as. Still, it didn't do well enough that the band could force its way up to that next level of infamy reserved for Metallica, Iron Maiden, Judas Priest, Megadeth, and Slayer. It's more accessible than The New Order, with lyrics focused more on environmental awareness and personal freedom, but I did miss some of that pervasive, overarching menace prevalent on the older albums. In retrospect, I'd rank it 4th in terms of quality across their entire backlog. I still listen to it fairly often, and its easily one of their most iconic releases, with the five members of the band represented as statues in a desert storm (precognition?).