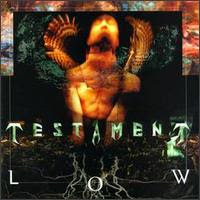 Taking into account the rather lukewarm reception received by most of their 90s records, it's a miracle Testament never felt the urge to fuck off and write to the Korn audience. After The Ritual, an album I happen to love, which streamlined and simplified their 80s output into a pure heavy metal chassis, I had half-expected the Testament Black Album. Yet Low was actually a reversal of paradigm, a modernization of their 80s sound clad in the muscular progression of production values, and easily more aggressive than its predecessor. It also saw the first shift in the  Californians' classic lineup of the first five albums, with John Tempesta (Exodus) replacing Louie Clemente, and death metal mercenary James Murphy (Death, Disincarnate, Obituary) filling in the surprise vacancy left by Alex Skolnick. All things considered, Low represents a fairly smooth transition.

If the sorry 90s rubbed anything off on Testament, it might have been the slight influence of groove metal circa bands like Machine Head or Pantera, but while I've met people who consider this their 'groove' album, I am driven to disagree. There's even more of an emphasis on the mid-paced chugging guitars, and they sound a lot more massive than, say, Souls of Black or Practice What You Preach, yet at their core the rhythm progressions follow similar patterns, they've just got a lot more meat on their bones in cuts like "Low" itself, or the caustic "Shades of War". Sure, there is some bounce to "Hail Mary", "All I Could Bleed" or "Chasing Fear", and you could jump da fuc up to those if you were so inclined, but it's still the same dark thrash metal, with a not dissimilar, atmospheric grandiloquence coursing through its veins as the older works. Where a lot of people turned to this group for the impressive leads of emergent guitar guru Alex Skolnick, the focus here seems even heavier on the mechanics of the rhythm guitars. Murphy is, of course, a seasoned shredder himself, and it was interesting to hear him experiment on the instrumental "Urotsukidoji" (named for the perverse tentacle porn anime) alongside some of Greg Christian's bass acrobatics.

Elsewhere, Low is business as usual. I didn't notice a huge difference between John Tempesta's style and his predecessor, though the guy was certainly rigged to provide a harder pummeling for the 90s audience. While Demonic is generally considered the album in which Testament foraged further into death metal pastures, you certainly hear a bit of that here through Chuck Billy's increasingly guttural inflection on a tune like "Dog Faced Gods", which is one of the most impressive and brutal on the album, with some Vio-lence like picking sequences dowsed in the big man's guttural abuse. There's also the requisite 'ballad' here, "Trail of Tears", above which Billy implements the clean, melodic timbre of "The Ballad", but while its not one of my faves on this album, it's at least smooth enough to forgive, with a nice lead tucked into the chugging bridge, and lyrics that serve as a foreshadowing to their latest effort, Dark Roots of Earth. There's not a lot of faster material on this album, but then there hadn't been for years; nonetheless, I did feel that there was a bit too much of a cantering tempo to much of Low that often feels samey or repetitive in tone, if not precise riff structure.

Also, very few of these tracks have had an impact on me in the long run. Like Souls of Black, I felt as if there were about 4-5 really good tunes, and the rest are disarmingly average, whereas The Ritual has had me glued to much of its run time for the past 20 years. Though they do tackle a few interesting subjects like ancient Egypt ("Dog Faced Gods"), a lot of the political, psychological, conspiracy lyrics were admittedly bland even by Testament standards. Still, I should point out that, while it was for me the least impressive of their full-lengths to its day, this is no steaming pile of shit like Slayer released with Diabolus in Musica, or Megadeth's Risk, or Metallica's Load. Though not quite as successful as they might have desired, Testament managed to weather its mutating roster and the questionable influences of the prevalent trends without losing its sense of identity. When you compare Low to The Legacy or The New Order, it sounds like a mild evolution of the same group, rather than some disconnected abortion of a career. Not one of their best records by any means, but it proudly keeps its head above the water.