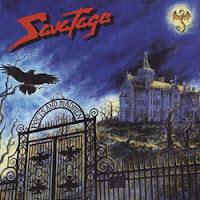 I must have soaked through at least a half dozen t-shirts in anticipation once the news arrived that Zak Stevens had left the Savatage camp, and that Jon Oliva would be fronting yet another of their studio albums. With the continued success of Trans-Siberian Orchestra, and the general lack of interest in the original band, I had no hopes of ever even hearing from them beyond The Wake of Magellan. Though they weren't officially 'disbanded', I suppose, Oliva has repeated down through the decade that the financial benefits and massive organizational undertaking that is TSO more or less precludes productivity from this old goat, but at least back in 2001 they were gunnin' to give it another try...

Well, Poets and Madmen is what we ended up with, and despite a few gleams of curiosity nestled beneath its solid surface, this isn't much more to write home about than Dead Winter Dead or its direct predecessor. The production is upgraded to a 21st century polish, and it's always great to hear Jon Oliva's maddening and monstrous inflection return to the metal sphere, but this serves as little more than a setup for his later albums through Jon Oliva's Pain, which has become the spiritual successor to Savatage in all things non-TSO. Chris Caffery's rhythm guitars on this are bludgeoning, rich and modern, but most of the actual riff structures are pretty weak and uninspired, suitable only as a bed for the orchestration and vocals. Poets and Madmen is not a full 180 back towards the epic metal of Hall of the Mountain King, because it still incorporates a lot of progressive metal elements, like the synthesizers slicing through "There in the Silence" or the sheer breadth of the vocal arrangements, which are comparable to Dead Winter Dead or TSO. Unfortunately, despite the array of weaponry being brought to the table, it falls incredibly flat.

I think ultimately it comes down to the guitars here. Where they once soared with eagles in the 80s, here they feel nearly as pasteurized and uninteresting as Edge of Thorns. The leads, many of which are performed by Caffery himself (Al Pitrelli had largely departed for Megadeth at this point), seem too tidy, lacking that wild animal magnitude Criss would explode into during the first decade of the band. Few of these songs are very exciting, they all just sort of fill out their skeletal framework with the minimal amount of enthusiasm. While it's cool to hear Jon again, his vocals naturally do not have that precise level of volatility that once made them such a distinct and beautiful component to the Savatage sound. I almost felt like the ballads on this record, like "Back to a Reason", provided its best moments, if only because the heavier material is so disturbingly mediocre. It's not an awful attempt to bridge the years between 1993 and 2001, but I feel like musically its just as quickly forgotten as half the albums that Zak Stevens fronted, and certainly it lacks the grandiose ambition of The Wake of Magellan, which was about all that album had going for it.

Even the concept here isn't so compelling, a fiction vaguely built up around a South African photojournalist named Kevin Carter. From the cover, I was hoping it would be about Poe...but Savatage had outsmarted me once again. Too bad they couldn't outsmart the songwriting process for this. Four years, and not much to show for it other than more musical chairs. If this was to be the 'new Savatage', then I'd say stick to the Christmas carols, stockings and candy canes.