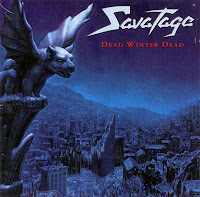 Dead Winter Dead is the first (and better) of two historical concept albums the veteran Savatage would compose to fill out the 90s, and it's at the very least a pretty ambitious effort which sees a continued shift in the landscape of the group's membership. After Alex Skolnick's short one-off performing the leads for Handful of Rain, he is replaced with another guitar god, Al Pitrelli. Longtime drummer Steve 'Doc' Wacholz had also departed the band, and his spot was filled by Jeff Plate. Most importantly, Jon Oliva decided to return to the microphone for a few songs, sharing duties with Zak Stevens, and this immediately makes the record a more tolerable listen for me.

Hell, even Stevens seems to blend in more with this production, not that his inflection has changed, but the moodier and sultrier nature of the compositions seems to better fit him during solemn sequences like the intro to "Starlight" or the secondary, narrative intro, "Sarajevo". The album itself is essentially a Romeo & Juliet style tale being spun through the Bosnian War conflict, far more interesting than Streets: A Rock Opera in concept, and another of the reasons I actually found this superior to the two albums leading up to it. This is far more of a pure progressive metal record, with moments of sheer heaviness amidst the gravitas of somber emotions, not to mention the incorporation of classical medleys in "Christmas Eve/Sarajevo 12/12", which would prove responsible for the creation of Trans-Siberian Orchestra (who would re-release this very same track), but hearkens back to "Prelude to Madness" on Hall of the Mountain King. They also pay tribute to a few classical composers like Mozart and Beethoven by lifting directly from them. Pay close attention, folks, because while album might not have been an enormous success, it spawned a project that would practically make the band a household name, at long lost...all they had to do was abandon Savatage.

Overall, though, the album seems such a transcendent leap from the creative knuckle dragging of Edge of Thorns or the almost random Handful of Rain, and it's far more effective at expressing its sentimentality than their prior attempt at a pure concept record. Still a lot of Queen influence, also some from The Who. The production beautifully captures the contrast between the harder hitting metal sequences, often no more than a few simple chords per lick, and the arrangement and keyboards of Jon and Bob Kinkel feel like you're staring out over an orchestra pit, drafts of warm tone rising towards you with voluminous confidence. Pitrelli's presence is clearly felt, adding a fusion/jazz element to the lead sequences even more than Skolnick did, and they definitely create a minor spectacle amidst the baser, sweeping bombast of the rhythm section. Though I don't always love Stevens' vocals in them, and the album would have been far superior with just Oliva, or perhaps another front man, tracks like "Starlight" and "This Isn't What We Meant" are admittedly well written. The fact that most of the lyrics are told from a characters' perspective renders them a lot less cheesy than the ballads on the last two discs.

Plate's performance is great, and the rhythm guitars are grafted with plenty of push, so much that there's this clean, live feeling to Dead Winter Dead which feels like Streets on steroids. It's admirable that the band would tackle a fairly recent, relevant event in history without coming off too judgmental or political. The love story doesn't do much for me, but I dig where it's set, and the conflicts created through the setting, a fine twist on Shakespearean tragedy, despite the happier ending. Yuck! I still don't enjoy Zak Stevens, but he was less intrusive on the experience than before, and despite the fact that I STILL feel like I got all the rock opera Savatage I needed with a handful of songs on Gutter Ballet, this seemed to restore some sanity to what in my opinion was an understandably ailing outfit. Sure, I miss the Criss Oliva riffs, the flash and flame of his performance, but you can almost sense his spirit out in the audience, smiling from the V.I.P. box at his survivors' perseverance. Not a great album, but a passable, consistent piece that isn't shy on ambition.