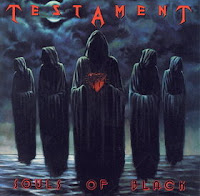 Souls of Black was not exactly a massive swan dive in consistency or quality from its predecessors, and it seems to be genuinely appreciated by a large swath of the Testament audience. But for the first time, I felt like the band wasn't really progressing anywhere, and though I might accuse Practice What You Preach of its filler track ("The Ballad"), there were actually a number of songs here that have never cried out to me. I've always thought that this was a symptom of the band running out of steam: they must have been exhausted after the first three, and to an extent Souls of Black seems 'rushed' out the door. I do enjoy the lion's share of the music here, but I'd be hard-pressed to remember the rest if I wasn't currently listening for the write-up.

Aesthetically, it's quite similar to Practice What You Preach, only the mix seems shoddier. The bass is less prominent, the guitars dingier, and there seems to be more of a reverb saturation. I even detect a little hiss to the CD, but again, I've hardly tracked down a remaster for it or compared it to other digital formats. At any rate, compared to records like Rust in Peace, By Inheritance or Seasons in the Abyss, it seems as if it was underdeveloped just to get it out to stores on time and maintain that one album/year cycle that wasn't always the best blueprint for success (as Metallica has proven time and time again). The only exceptions are the vocals of Chuck Billy, which are just as consistent and poignant as any of the previous records, and Alex Skolnick, whose leads seem to carve out quality from whatever bedrock they're settled into. There are also a bevy of surgical, semi-tech thrash riffs even in a few of the weaker cuts that would have been so much more excellent with a better mix of instruments. I also dug the cover art here, another proxy for the band members, though the title font is hammy as hell; combined with the heart, it makes me feel like I'm on a Valentine's date at some diner, being served by Dementors from the Harry Potter universe.

As for the song selection, it's set up quite similarly to Practice, with in my estimation the best material all wedged up front in the track list, and then a simmering down and compromise for the later numbers. After the Mediterranean mystique of the acoustic intro "Beginning of the End", "Face in the Sky" crashes in with some decent grooves playful spikes of lead guitar, and other standouts include "Love to Hate", "Falling Fast", "Absence of Light", and "Malpractice". I go back and forth on the title track, a woozy groover with a clear hard rock influence permeated by harsher, thrashing guitars, but it's not out of place here, and also might have fit in flush with the third album. The only real stinker here is "The Legacy", another shitty power ballad track that you can bet your ass was included because of "The Ballad"'s market penetration, but comes out even wimpier than the last. The other late cuts like "One Man's Fate" and "Seven Days of May" also fall short of the quality I'd expected, and as far as I'm concerned the last 15 minutes of the whole record should just have been left off (an EP would have sufficed, and given the band some breathing room).

In the end, for all its flaws, Souls of Black still has that ability to evoke some nostalgia and transport me back to a time and place of significance; it's not as if the band just suddenly sucked, and in fact my favorite material was still to follow. I recall seeing the band play some of this material on the Painkiller tour with Judas Priest and Megadeth, and I certainly played the heck out of my tape for a few weeks, but its charms faded rather quickly, and I would find myself steering back to The Legacy or The New Order. A good album, just not a great one; worth buying if you love the first three, but not a strong place to start if you're a virgin to their sound. I'd love to hear most of it fully remixed or remastered, perhaps even recorded again with more power to the guitars, but as it stands, I don't set aside much time for this these years.