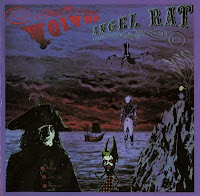 Poor Angel Rat. Few seem to love you as I have, for you arrived at a time when people were simply not equipped to appreciate the many values you wore like a billowing gown upon your many-hued flesh.

On the heels of such masterpieces as Dimension Hatröss and the ensuing Nothingface, albums so far ahead of the metal mindset in their time that they are still widely misconstrued and underrated, it would have been a tall task for Canadians Voivod to match themselves effectively with another full blown, heady concept record, and so they didn't. They penned a number of smooth, melodic curiosities, imbued them with the dark, futurist melancholy of Nothingface, and set out to create what was their most accessible album to date, perhaps STILL the most accessible (though the eponymous 2003 album comes mighty close). Lacking the grand, experimental unification of its predecessor, which if we're being honest, had just about abandoned the band's thrash roots entirely, Angel Rat was an attempt at creating a 'metal lite' style that still honored the Canadians' psychedelic, progressive influences like Pink Floyd and Rush, and it's no surprise to me that it was an inspired, if understated success.

Though I had quickly become used to the idea that Voivod was going to be one of those bands who would put out effort after effort of evolving, reliable fascination, I didn't warm to Angel Rat quite as quickly as my brain melted to the two previous albums. The strange collage of images relating to individual songs seemed a bit unusual, as did the classic scrawl of the band name and title font. Yet it still kept that purplish background hue, and I'd be shocked if this turned out NOT to be Away's favorite color. Once I listened, I found that the songs were deceptively simple, quite airy, and focused more on simple melodic hooks. Piggy's dissonant development was subdued throughout, and the band's aggression did not return to its previous heights from the mid 80s. The vocal lines seemed aimed at a broader audience, and Snake was relying less on the punkish pitch he was built on. Also, while Nothingface had turned out a mellower album than its own predecessors, there was still something cryptic about it, unfriendly to the mainstream; where, in a kinder world, Angel Rat could have easily gotten some airplay on rock radio for a "Panorama" or "Clouds in My House".

But don't let this subdued, simplification deceive you into thinking that these tunes aren't poignant and haunting, because frankly they're among the most hypnotic the Canadians have written. Take "The Prow", a fetching piece of maritime mermaid-punk with incredibly catchy verse lines and chorus, and then this trippy bridge with organs, mellow vocals and scintillating guitar harmonies that wouldn't have been out of place on the 1989 album. "Clouds in My House" is what might happen if the Rolling Stones overdosed on space dust and David Bowie covers, while "Twin Dummy" is simultaneously happy and creepy, bass lines flowing like melodious syrup while the titular homunculus makes a new 'friend'. More powerful than any of these, the machine-like, pseudo-industrial rock of "Golem" tells us the sad tale of an artificial intelligence becoming self aware despite its monotonous, predictable existence. I'll take that over any sentimental Star Trek: The Next Generation episode in which Data discovers and contends with another facet of his humanity.

Angel Rat doesn't sound like it was on quite as mighty a budget as Nothingface, but whether it was simply rushed, or underfunded, I couldn't tell you. Regardless, the music is so well structured and memorable that it achieves its own sense of timelessness. The guitars, while not as driving and central as on earlier works, are so light and beautifully scripted to the vocals and drums that I can envision seraph wings sprouting from Denis D'Amour's back. The bass is still slightly distorted, not as often brought to the fore as it was in 1989, but still perhaps the central instrument. Drums are much easier on the ears this time out, and Away could have probably made himself a snack while performing most of these with a single hand and foot, but then the songs don't call for much more energy. As a whole, Angel Rat steers between uptempo, jubilant swathes of melody and steadier, slower pieces that build a more psychedelic resonance, but it's got a remarkably deep track list, of which only the mellow "Freedoom" and "Nuage Fractal" come up a fraction short (and both are still pretty good...)

People that had long felt alienated from Voivod through their 80s progression might have heard this and exclaimed 'what the fuck?' loudly, but I can't say that Angel Rat is ultimately that much of a surprise. It's a subtler record than Nothingface. It doesn't hit you over the head with its outlandish, convulsions of being 'Other', but it just slowly settles onto your spirit like a drugged haze. It may have breached the band's 'perfect streak' in terms of my own reaction, but it's still an amazing album and was a highlight for me in 1991, a year in which I had an adverse reaction to many of the latest records from many of the extreme metal titans (Sepultura, Morbid Angel, Death, etc). It's not heavy in the slightest, at least not in terms of the riffing or aggression, but it's unique, compelling, and very often beautiful...