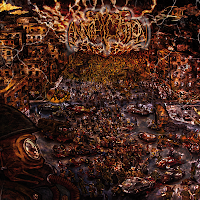 Another French act to join the expanding Kaotoxin Records roster (alongside Ad Patres), Savage Annihilation embark on an abusive, direct path of brutal death metal which draws equal parts influence from older Suffocation, Morbid Angel, Cryptopsy, Krisiun, Carcass and a rogues' gallery of other ghouls who made their mark in both the US and European scenes through the 90s. Despite the band's decade of previous existence, this is not your polished, refined modern technicality here, so expect a bit of clamor in the song arrangements, but if you fancy a lot of intense blasting, well written leads, tremolo picking and gruff, nihilistic guttural vocals, then Cannibalisme, hérésie et autres sauvageries has your face written all over its gut-stomping bootstraps.

There's nothing pretty or accessible about this album, and the most variety you'll hear is in the different song lengths, which range from about 4-7 minutes. I enjoyed the mixture of tinny blasted drums with the ominous, churning guitar tone which brought to mind Morbid Angel circa Covenant. They pepper a lot of squeals, low end deathgrind progressions, and other techniques into an apocalyptic climate of explosive viscera nearly as insane as the cover art. Guts are flying everywhere here, and the monotonous drawl of the growling seems to hover right on the edge of the guitar tone, almost inaudible in places (except for when the Deicide and Carcass-styled snarls erupt), mocking you like some murderous phantom while the guitars flay your skin off and dig out your intestines. There isn't much complexity in terms of the actual riffs being manifest, but the Frenchmen compensate with the sheer number of them that they vomit in your direction, and they often broil and blend into one another like a stew of human organs: you will constantly find yourself overwhelmed, and not a whit bored when listening through this.

I won't lie: there are times when this record feels like a steaming, writhing pile of entrails shoved onto a plate, and the seeming disorganization of the chugging and blasting alternations can create a ripping headache, but therein lies half the fun. Savage Annihilation don't act like their shit doesn't stink: they write repulsive, ugly barrages of death metal with no apologies. But this isn't entirely the child play of Neanderthals, for the lead guitars in cuts like the crazy closer "Ouvrez la tombe des assoiffés de sang" are both frenzied and meticulous in adding another dimension of horror to an already overcrowded cemetery. The song titles and lyrics are in French, which adds to the charm, but they're not complicated to translate. Ultimately, where the album might not deliver much on originality, it's quite long on blustering brutality, a smear of pathological entertainment, all goresoaked enough to sate any acolytes at the butcher block altar. Disgusting in all the right ways!