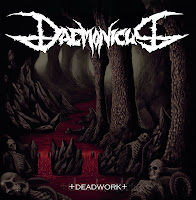 My previous experience with Daemonicus, their 2009 debut Host of Rotting Flesh, was of a pretty hungry, competent and pummeling young Swedish death metal outfit with a primal energy and production that just didn't manifest into very memorable songs. With Deadwork, they seek to refresh and modernize their songwriting to better results, and I can claim with zero hesitation that that is exactly what they've done here. It's not the most consistent record, and there are a few truly dull grooves or hooks we've all heard a thousand times before, but at the end of the day, there are a few tremendous songs among this bunch which any fan of the style should appreciate; the early signs of a band beginning to flourish.

Daemonicus is not one to eschew melody or variation in a stumbling attempt to recreate Left Hand Path, Slaughter of the Soul or any other Swedish monument, but there's no doubt they've got a lot of influence from Dismember, Grave, Unleashed, Bolt Thrower, Amon Amarth and other Euro gods. The rhythm guitar tone is heavily redolent of that old 90s sound still so popular; muscular enough that it strongmans the simpler grooves, but also pretty polished to pack a punch. The melodies, where they appear, are usually quite good, and rescue what might otherwise be a pretty mediocre matrix of chord progressions; the use such leads and atmospheres often recalls the death & roll oriented acts like Hearse or Desultory, and altogether these elements fashion tracks like "The Grandeur of Total Termination" and "We Feast On Your Flesh" into effective ragers that won't soon escape your thoughts. The drums are bright and splashy, the bass uses a grimy distorted sewer tone to good effect, and as a whole, the production of the album is huge and 'now', not so clean as, say, Twilight of the Thunder God, but nonetheless tight and professional.

The vocals aren't too guttural in nature, more of a visceral, rich snarl imbued with plenty of charisma, and they hold up when he sustains syllables out over the ballast of a chorus groove. Where Deadwork truly worked for me is where those slower, Bolt Thrower-meets-Grave, breakdowns, melodic guitars and vocals all congealed into this epic bruise on the chin; where it became something of multiple, emotional dimensions and not merely a simpler, thuggish exercise in familiar note placement. It's not as dark of an album as you'll hear from other upstarts like Miasmal or Tormented, but at the same time it's mildly more accessible towards the melodic death fans, without sacrificing its churning core aesthetics. There are probably only 3-4 songs here that I'd return to with any regularity, but it's easily a rank or two above its predecessor Host of Rotting Flesh, and I'd recommend it for fans of anything from other newcomers Puteraeon and Entrails to Feral or the latest Desultory record.