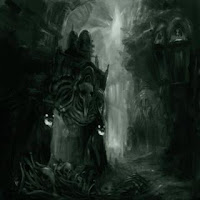 Apart from its gorgeous cover, which looks like the concept art for some frightening MMO/RPG dungeon, the first thing I noticed about Auroch was their rather distinct take on death metal that isn't so prevalent these years. Aesthetically, From Forgotten Worlds dwells upon the precipice of both sheer 90s brutality and older school viscera, lanced through by acrobatic guitar athletics that race all over the fretboard. As such, they avoid the claptrap of cavernous emissions so commonplace in younger bands of this era, and at the same time they eschew other stereotypes like the surgical polish of West Coast carnage or the Swedish tone that many new wave death mavens cling to. Classic death metal tempered with a technicality that never excludes decades of the genre's evolution.

Admittedly, this full-length debut  is often a bit too spastic and passive/aggressive for its own good, and the Canadians often shift into varied transitions that feel cluttered and claustrophobic against one another, but once they settle into a particular, chugging groove or vicious runs of churning tremolo lead/melody, they excel. There are also a number of fine ambient passages throughout (like the intros to "Talisman for Total Temporal Collapse" or "Slaves to a Flame Undying"), or slower, atmospheric sequences where the guitars are given dissonant breath, and these help to break up the flurries of speed, at the risk of creating even more of an overall contrast. Vocals are shared between a guttural bark and blackened rasp, neither of which I thought were prominent enough in the mix or all that interesting, somewhat subordinate to the guitar passages, but they do add to the album's sum variation and are often spat out in ghastly conjunction. I'd also comment that the drummer and guitarist are quite skilled: I wasn't always picking up what they were putting down, but in terms of sheer dexterity and technicality, they've got proficiency aplomb.

This album is best when its at its most consistent, like the track "Terra Akeldama", which is a pretty straight shot of harried, clinical death metal with loads of drum breaks and discordant, punishing drama. The mix throughout is nice and natural, not overly dusted off or exceedingly 'modern', and this adds credence to the band's individuality. Trying to list the wealth of influences in this music would be a daunting task, but at times I would make comparisons to earlier Cryptopsy, Morbid Angel, perhaps fellow Canadian black/death hybrids like Adversarial or Begrime Exemious in that natural, unfettered tone they diffuse. All told though, even if I wasn't always sold on the oft clamorous dynamics that comprised this debut, a few of its puzzle pieces slapped together in haphazard, incongruent patterns, it's pretty sporadic and fascinating. I was happy to read that the band had recently hooked up with Hellthrasher Productions, a cool Polish imprint with other great bands like Hell United and Intestinal on the roster, and some solid distribution channels. While not entirely consistent or memorable, From Forgotten Worlds is certainly ambitious, and there is a boundless potential at play here, which, further refined, could prove unstoppable.