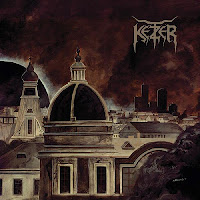 Even just looking at the cover of their sophomore album, the Germans seem to have cast aside the Satanic security blanket to provide more of an enigma into the nature of the music and lyrics on Endzeit Metropolis. What mysteries will this dark, doomed city and its ebon domes hold for the listener? The image is simple, to be sure, and perhaps strange in tandem with such a violent and demonic band as Ketzer ('Heretic'), but it's immediately interesting, where another devilish slave master or grim reaper would likely have prompted only that 'this again?' reaction that I sadly and jadedly take on a large number of blackened works in the 21st century. Fortunately, the creativity also extends into the lyrics, and to some extent, the music.

Digging below the surface, the album is quite close to its predecessor in style, blackened thrash and speed metal aesthetically redolent to Teutonic forebears Desaster, but the band has actually stretched its wings out a bit and interspersed additional passages of atmospheric variance into the bevy of bedrock, sinister riffs that dominated Satan's Boundaries Unchained. The guitar tone is more potent than on the debut, and the vocals mixed to it a bit more closely in volume, so it lacks a fraction of that record's echoing misanthropy, but feels more abrupt and straight to the listener's face, especially those lower paced rhythm guitar grooves that hail from the school of Bathory, Hellhammer and Darkthrone. There is more an emphasis on the mid-paced, textured and swaggering tempos dowsed in harmonies that made up about half of the first album, and the band even stretch out into a more 'tender' territory, like the guitar driven, melodic interlude "Farewell, Fade Away" or the understated acoustics that inaugurate the closing epic "He Who Stands Behind the Rows".

There is certainly a maturation here, but not so much in the actual metal riffing as there is in the lyrics, which are pretty damned interesting paeans to the fragility of existence, almost poetic introspection as the band speaks of its last minutes before Armageddon, spent in a passionate revelry. Completely unexpected, and far beyond what you're usually exposed to on a record of this sort. I also felt that the riffs were more naturally dynamic, with each individual composition expressing some nuance, not to mention that the tremolo guitar patterns and beefier rhythm tracks saunter off into more unpredictable configurations. Not to the point that it feels 'progressive', per se, just better conceived and more interesting, especially in cuts like "Aesthetics and Ecstasy" or "The Fever's Tide". Some degree of cruelty and sadism has been traded off here, and it's not quite so fiery and sinister as the debut, but I'd have to say, in the end, even if it's not perfect, that I enjoyed this more than its precursor. Only by a small margin, though. Not just for fans of blackened thrash or speed this time out; Endzeit Metropolis should also hold some appeal to fans of melodic Swedish black metal circa the mid to late 90s. Whether your poison runs from Desaster or Dissection, this is well worth a listen.