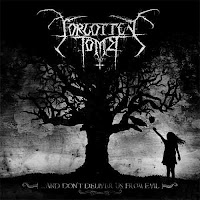 Forgotten Tomb was a band I had heavily in rotation through the earlier years of the new millennium, a spectacle of grisly sadness that, from Songs to Leave (2002) through Love's Burial Ground (2004). Somber architecture threaded with suicidal hostility, they were by far one of the most promising black metal exports out of Europe in this period. And then came the inevitable progression phase, through albums Negative Megalomania and Under Saturn Retrograde, and though I certainly couldn't fault the Italians for trying something new, my own interest in the output had begun to wane. ...And Don't Deliver Us From Evil feels, to some extent, like 'damage control'. It's got a slightly more modern feel to it than, say, Springtime Depression, but a lot of that fell majesty of the old Forgotten Tomb creeps in here, albeit lavished in the brighter polish of the new production.

I think the 'atmospheric black/doom' tag still fits really well here, for while the vocals and riffing sequences often fall on the former side of the equation, there are plenty of slower grooving chord rhythm in tracks like "Deprived" (which had its own EP earlier in the year) that tether off the more cutting, higher pitched melody. The drums have a lot of variation, from the steady beats that moor the mid-paced, Katatonia-like rock out patterns (an in opener "Nullifying Tomorrow"), to the muscular double-bass batteries. Vocals are entirely over the top, gruesome and robust rasps that, along with the slice of the upper register guitars, really drench the rhythm section in sheer agony. Herr Morbid sounds much the same as he always did, only the inflection is more full-bodied and totally audible alongside the instruments. The bass is also a strong point to this, with a lot of curving, interesting grooves that support the guitars without often cloning them; in part responsible for giving the Italians' music that massive, progressive subtext you'll recognize from other groups like Opeth. There are also some Gothic-tinged, deeper melodic vocal harmonies (as in "Adrift") and clean guitars that shine in contrast to the heavier moments, without being particularly memorable in of themselves.

The longer, meandering songs are pretty much the status quo for Forgotten Tomb, but here they are reined in usually around 8-9 minutes, briefer than some of the swollen, depressive behemoths they penned back in their prime. The mix is in general quite bright, you can hear everything perfectly, like most modern black metal albums that have a budget and aren't afraid to sound like it. I occasionally got enveloped by a few of the dreamier, glorious guitar melodies throughout the 54 minutes, but didn't find most of the drudging rhythm guitar progressions all that exciting, despite the nice dichotomy they create against the airier flights of eloquent suffering. That said, there are certain exceptions, and tunes like "Let's Torture Each Other" reminded me of why I loved the groovier, simple black metal strategists like Finland's Ajattara or the older Darkthrone records, even if the packaging is prettier here. All told, ...And Don't Deliver Us From Evil is pretty damn solid, better at least than Under Saturn Retrograde, and it was great to experience those old sounds I so enjoyed from the first few records. If you're into vast, tragic swaths of sound crowned with melody and grandeur, check it out.