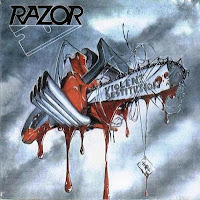 Violent Restitution is the thrash metal equivalent of being manacled to a batting cage and having each member of the Bad New Bears roster beat you in the ribs, liver, balls, and upside the skull a few times in succession; then to smirk and spit in your eye as they hand off the sporty bludgeon to their next teammate. It's just THAT fucking entertaining and abusive, and in my opinion, one of the most fun, frenetic and simply intense efforts of its kind in existence; certainly one of the most incendiary and memorable speed/thrash records of the 80s outside of Germany or California. I've gotten so much enjoyment from this album in the past quarter century, that despite having purchased the LP, cassette and CD versions, I feel like I owe Dave Carlo at least another $100 dollars and a six-pack.

You know the old saying 'they don't make 'em like they used to'? Well, this is the living, serrated proof of that statement's validity. Even though I'm annually inundated with countless, excellent examples of blackened thrash, death/thrash or hyperactive paeans to the 80s, many of which manage to successfully ape the visceral excitement of a record like this, there's nothing quite the same. Like a Reign in Blood, Darkness Descends or Zombie Attack, it fashions the most straightforward of intentions into a seamless bloodthirst. Fast drums, angry riffs hurtling past you at a mile a minute, and gruesome vocals that sound like they're coming from a man who was just stabbed in the face during some barroom altercation with a half-broken glass bottle. No riff seems out of place, no derelict tempo or stylistic diversion enters the frame to diminish its momentum. Violent Restitution never pretends to be what it's not, knows and respects its own boundaries, and offers you precisely what its cover implies: an escape into social unrest, serial killer b-flicks, and a repository for unchecked, unapologetic masculinity. So close to perfection that you can taste it. In fact, if I wasn't such a massive nerd for Voivod in their prime, this would prove my favorite Canadian metal record. Ever.

Like its chronological/national neighbor Dimension Hatröss, Violent Restitution is a concept album. But the theme here isn't rocket science or speculative microscopic adventure. No, this is about 14 ways to kick your ass so hard that you'll have to floss your colon after it comes up through your throat and breaks all your teeth. The riffing provides the central force, tireless escapades of rapid mute picking and barrages of chords, coiled in the potency of Carlo's chosen tone. The guitars have more punch than almost any other Razor record. Less reverberated and atmosphere than an Evil Invaders or Executioner's Song, but denser and more effective than an Open Hostility. While Dave is the epitome of the thrash rhythm guitarist, even more so than fellow Canadian Jeff Waters of Annihilator, he's also quite capable of unhinged leads ("Eve of the Storm", "I'll Only Say It Once") that offer the bluesy, burning wildness metal snagged from its hard rock ancestry; or brief, spurious runs up and down the higher strings which add an extra level of chaos and acceleration to the standard machine gunning rhythm matrix he radiates.

Everything else on this album is secondary to that guitar, but by no means does it go down without a fight. Rob Mills' drums slap along like empty buckets being strung along a dragster on the speedway, and while there's not a lot of variation in what he's playing, he amply fills the shoes of predecessor M-Bro. Adam Carlo, younger brother do Dave, is the other new member on bass; and though his lines do little more than to mimic the guitars and increase their depth, there's this natural, pluggy tone to his playing that pounds away at your eardrums like the pulse of a heroine addict who just realized he's out of supply. Overall though, the album's engineers and producer (Brian Taylor, who had also worked with other Canadian mainstays like Sacrifice) did a knockout job of presenting Razor in this pummeling, pungent sound that easily trumps the airy aesthetics of its predecessor Custom Killing, or the thinner mix of Malicious Intent.

I should mention that the chainsaw samples, which appear at several points on the album, are excellent, and fire up the loins of the album's pacing even further. Unlike the ass-backwards, terrible Southern hard rock band Jackyl, whose cut "The Lumberjack" featured a chainsaw 'solo' and helped buy their fame, the gimmick is a lot more fun here, since it's obvious influenced more directly by the slasher flicks of the 70s and 80s. Violent Restitution, after all, is a very violent album, so when that buzzsaw begins a buzzin', it forces the listener to want to kick all that much harder. Razor also perfects their instrumental thrash opus here with "The Marshall Arts", an aptly pun-titled piece of moshing resilience which features some of the explosive riffing on the album straight out the starting gate. I'd place this in the arena with just about any other track of its sort, certainly with S.O.D.'s "March of the S.O.D." which had become so famous through its stint as the intro to Headbanger's Ball.

Stace 'Sheepdog's' vocals here are a tinge dry, but he's using the same register as the previous albums, with a lot of puerile, irascible barking and slight screams that beautiful permeate the brash hostility of the instrumental foundation. Alongside Jeff Becera or Cronos, this guy had hands down one of the best voices in the business, grimy in all the right ways and places. Violent Restitution would prove his swan song with Razor, and the metal scene in general (he did a brief jaunt with Infernal Majesty this same year that never amounted to anything), and let me say this: the loss is ours. Unlike most of the newly birthed thrashers of the current era, he has an instant character to his inflection that never evades your memory. It's not 'trying' to amount to anything, it simply is, and it's a fucking bloodbath well-suited to the hilariously blunt lyrics, a non stop flood of expressions guaranteed to get your face (or someone else's) clubbed in an alleyway.

41 minutes. 14 tracks. Choosing favorites among them would be nearly impossible, since the quality is so taut and consistent. Obviously "Behind Bars" has received much attention through covers (like the great Cannibal Corpse version), but "Hypertension", "Taste the Floor", "Enforcer" and so many others belong on a highlight reel of the 80s' greatest thrash. I also loved the smutty "Discipline", or "I'll Only Say It Once", which hearken back to the molten speed-dirt of Executioner's Song; and "Out of the Game" with that amazing mid-paced riff that just pops along up until the verse erupts. Only a hand few fall shy of perfection, like the title track, but at worst it's only enough that I could graze off a few points to my overall score. Yes, just a marginal increase in depth would have netted this a 10 out of 10, 100%, but it's nevertheless one of the most essential purchases a thrasher could make. Even in a year of brilliant extremity like Blood Fire Death, Punishment for Decadence, Leprosy, South of Heaven, The Morning After, and Malleus Maleficarum, this still earns a spot at the dinner table, and sharpened utensils with which to carve you up. Prepare for evisceration. Prepare for impact.