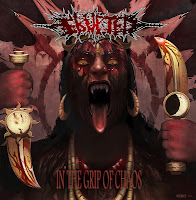 Based on what I've seen of the band's promo pictures, Erupted seems like a relatively young band of morgue dwellers, and In the Grip of Chaos is the Swedes' first album. I can only imagine what it must be like to live in one of those godly metal countries; for all the United States has contributed to the field, I'd be hard pressed to find a single younger guy (or girl) here in my Witch City neighborhood who listens to anything other than the usual Nicky Minaj or Lil' Wayne bullshit. For fuck's sake, I'd have to wander downtown during peak social hours before my radar could even spot a single damned Goth wannabe. If only the youngsters in this area grew up on fucking Grave, or Entombed...

The band itself is also quite new, forming in 2010 out of the ashes of some earlier project. I'd like to state up front, that while everything I've stated thus far points towards this being yet another fit of old school death worship circa the 90s, Erupted do not practice the typical overdrive and melody that their hundreds of peers thrive off. This is a much cruder sound, redolent of brutes like Cianide or Autopsy, with filthy, palm muted chugging patterns that alternate between barebones grooves and faster, busier movements. The vocals are a pure, hoarse guttural bark emanating from deep within the guy's lungs and guts, and above all this is some violent fucking music well-suited to barbaric moshing circles. The Neanderthal note progressions are often sauteed in slightly more mesmerizing melodies or lead wails, which add the only real depth to the album, but otherwise this is flat-out, muscular evil in which the drums sound really raw, and that central thuggish drawl of the guitars is matched only by the vocals in its punishing primacy.

Those compliments aside, In the Grip of Chaos does suffer from an overstock of derivative, simplistic riffs that don't exactly evoke much imagination. It's hardly an ambitious record, and often it drudges and drags along with an admittedly dull bombast. That's not to say that the Swedes lack variation, because they know enough here to infuse some speedier elements into the low end morass of knuckle sandwiches that comprise most of the guitar progressions; but even with the change ups, the album feels as if it's nothing you haven't heard elsewhere, done better. The nihilistic growls are as weighted as wet cement, but they're pretty much a one trick pony, except where they go super-guttural like in the atmospheric bridge of "Born to Hate". The double bass driven, chugging beatdowns are delivered as seriously as old Bolt Thrower, but the guitar patterns just don't add anything new to a tired formula. Overall, not incompetent for what it is, and I dug the cover artwork and the band's commitment to raw savagery, but while the sheer force of the record might be enough to leave a dent in my skull, musically it left less of an impression.