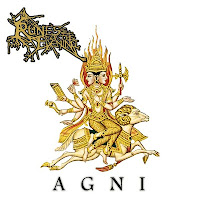 The first of two EPs recently released from Texans Runes of the Evening, Agni takes its name from the Hindu deity (much like its sister recording, Indra) and presents three cuts of searing, melodic black and death metal with a distinctly European flavor from about 10-15 years ago. As usual, I was expecting a little bit of ethnic influence relevant to the concept, so I was thrown off that this was rather straightforward aesthetically and not drowned in Indian folk instruments, but that's not to say that a concept need always reflect its cultural inspiration in the choice of music itself, and for playing a nearly gimmick-less variation on the formula, these gentlemen do not make a bad show of it. Lyrically, also, the band seem heavily inspired by all manner of interesting fiction, theory and Eastern philosophy.

Best way to describe this might be later Immortal (Sons of Northern Darkness) meets Dark Tranquillity, but in truth I heard a whole host of sounds including Enslaved and Dissection. Guitar progressions aren't scripted in the most evil or threatening patterns, but more a flurry of bright, dense chords threaded with choppier runs of almost thrash-like muted sequences for variation. Runes of the Evening includes a lot of warmer, glorious notes, but that's not to say this is at all uplifting or happy, because often the chords crash along with a cold, cutting grandeur that makes you feel like you're staring out across a glacier. Not what I expected upon seeing the cover, of course, but that's just how I felt. The drums are loaded, plenty of double bass and blasting when the action picks up, a few percussive breakdown style beats that keep the tempo from repeating itself ad nauseum, and you can also make out the splashing clamor of the cymbals. Bass lines are kept simple, but the instrument is admittedly pretty loud when you've got this on full crank, and it really stands out against the higher pitch of the guitars.

Vocals are a grimy, petulant rasp that doesn't always distinguish itself much from the music beneath it, but again it's pretty fitting for the style, and they often bulk up the inflection with some deeper, broader growls to keep it from becoming monotonous; and there's plenty of echo to give it resonance over the busier riffs below. They don't skimp on the guitar riffing, and there is variation enough that none of the blasted rhythms or melodies wear out their welcome. As for production, it doesn't sound too heavily polished, the guitars have a nice texture to them and the levels of all instruments could be tweaked on a higher budget, but Agni is still vivacious, loud and clear all around. If the EP suffers from anything, it's that there's just not a whole lot of creativity happening beyond the very idea of this, and even though Runes are decent in most departments, and you won't hear many American bands playing in this niche, this doesn't present much that the seasoned follower of Swedish and Norse black and death metal hasn't already got in spades. Still, if you enjoy stuff like the harder Agalloch, Woods of Ypres or Wolves in the Throne Room tracks, or the Scandinavians I mentioned earlier, it's not a bad listen.