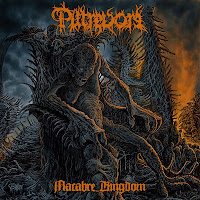 We've been so spoiled with great old school death metal these past few years that it's felt as if there were a carnage strewn Christmas taking place at least once per week, but fuck if I'm going to complain about it. Is it trendy? Sure. Has much of it amounted to anything more than a tribute to the forebears of the early 90s? Indeed. Does Putrevore's sophomore album still kick ass? Yes, yes it does, and in a year that's brought me such gifts as the Horrendous debut and Necrovation's self-titled sophomore, I just don't know if I can bear any more of this level of awesome without imploding. And yet here it stands, a ghastly monolith, the second full-length collaboration between Dave Rotten of Avulsed, Repulse Records and Xtreem Music, and the inimical Roger Johansson of Sweden.

Yes, somewhere between recording his other thirty-eight death metal projects  this year, Rogga found the time to compose and release what might just be the best album in either of these guys' careers so far, a pummeling and enormously wretched paean to the age of Incantation and Rottrevore, smeared with a bloody reduction of churning Bolt Thrower brutality, muscular Pestilence death/thrashing grooves, a few Hellhammer or Obituary styled chord progressions (as in the bridge of "Awaiting Awakening Again") and other techniques of old. But I don't want to sell Macabre Kingdom short (if you could call such comparisons 'short'). This does not at all sound like a clone of any one particular group, it's another of those records that proudly wreathes its influences in the production capabilities of the current era, and thus it achieves a dense, abysmal grandeur that might not have been possible were it released back in the heyday of the style. Let's just admit it: the niche of crushing, atmospheric death metal was never quite so popular as it is right now, and Macabre Kingdom is hands down one of the best of the bunch, far more effective and memorable in my estimation than other, heavier hyped records like Disma's debut Towards the Megalith last year.

This is due in no small part to the Cyclopean production values on exhibition. The guitars are raw, potent and absolutely furious, both in the slower, grooving context and the floods of choppy, blasting viscera that help offset any possible sense of rigor mortis from ever infesting the listener's newly slain corpse. Whether they break out an airy, eerie squeal or a massive octave chord in a breakdown, it all translates evenly onto the album's rictus death mask. Though most of the guitars are simplistic in structure, some of the faster passages have a few flights of complex death/thrash guitar patterns that always attract the ear, or clinical, evil tremolo melodies and sinister, sluggish solos. The riffs do occasionally feel familiar, but they're nonetheless entrancing in their undiluted hostility, and the album's relative brevity (about 35 minutes) ensures that it repeatedly feels blistering and fresh. The bass is deep and ruddy; and new drummer Brynjar Helgetun, who has worked with Rogga in other projects like Ribspreader, The Grotesquery and Those Who Bring the Torture settles in nicely to the alternating matrix of blasted momentum and leaden, sparser steroid grooves.

But props really have to go out to Dave Rotten here, who takes this Craig Pillard-like inflection to great heights, resonating out over the album's underworld atmosphere far more effectively than most of the other cavern-core front men you've heard lately. The Spaniard sounds fucking monstrous. If only this guy had voiced the Balrog in the mines of Moria, Gandalf would have pissed his robes, and the Fellowship would have been fucked. Voluminous, rumbling sustain creeps into the longer intonations, and though one might mistake the actual notation as monotonous, it sends crackles up the listener's spine as if he was standing on seismic disturbance. Perhaps it isn't the deepest or lowest pitch in this particular niche, but still found myself erupting in laughter...nervous laughter. Fear.

I was already a fan of this outfit since they released Morphed from Deadbreath in 2008, but as good as that debut was, it was a mere finger-frank appetizer wrapped in bacon compared to this swollen sausage meal of blood, grime, guts and hellfire. Juanjo Castellano's cover artwork is excellent, a ghoulish fiend with huge claws upon a throne of spines and bones, almost looking as if he's watching some damned jester dance before him. Putrevore excels in just about every category here, and while admittedly not the most innovative or unique record I've heard lately, it's for sure one of the highlights of 2012. A sometimes lumbering, something bursting necrotic juggernaut siphoning off the souls of the innocent. Rrrraaarggghh...fucking die!