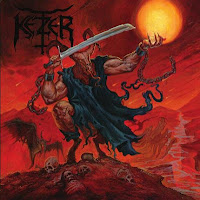 Though the blackened thrash metal category has long held its strongest presence in Scandinavian territories, Germans have not been far behind in producing some of its underground favorites. After all, the niche WAS birthed by records like Sentence of Death, Obsessed by Cruelty, and Pleasure to Kill just as much as it was by the Bathory s/t, and groups like Desaster and Witchburner have long carried its torch, passing its hellish flame on to upstarts such as Rhineland-Palatinate's Cruel Force and Nocturnal. One of latest circles of tyrants reaping these rounds is Ketzer, who've generated quite a buzz in this sphere, and after spending some quality time with both their full-lengths, I would have to agree that the praise is indeed warranted, even if I've not been entirely won over.

Satan's Boundaries Unchained is not the sort of black/thrash you'd liken directly to the ripping, raw and ruddy speed metal influence of pioneers Venom, Piledriver, or Bulldozer. In fact, the band I was most reminded of is Desaster, with similar, epic and incendiary chord progressions that draw upon the ire and might of Bathory circa 1984-1988. However, they do have those no-frill acceleration runs in cuts like "The Fire to Conquer the World" and "I Am Your Unholy God" where they crisply conjure forth Satanic speed metal circa Slayer and Destruction, walls of tremolo terror erupting into mid-paced, mosh readied rhythms that do wonders to help balance out the pacing of the debut as a whole. Admittedly, a lot of the note patterns Ketzer whips up are pretty predictable, nothing you haven't heard a dozen or so times in the past, but they offset that fact with a lot of atmospheric, airy tremolo melodies that give it an edge. They do not simply throw 2-3 riffs at you and expect them to stick like a lot of the cruder black/speed cults; all of the tracks on Satan's Boundaries Unchained are well-developed and fulfilling.

I'd also comment how much I loved the drums on this record, complementing the typical, driving speed and black metal beats of antiquity with busier snares and fills than I might have expected. The guitar tone is solid, thinning out beautifully for the tremolo picking sequences, condensed for the classic feel of the chords. The echoed rasp of front man Infernal Destroyer is nothing new for black metal or black/thrash in general, but it does an efficient job of resonating out into the haunted night like an abyssal kite (the bird, not the hobby) as it surveys the torment and damnation beneath it. The occult and violent themes and titles found here are your standard fare, ubiquitous tracts of Satanic terrain you can find elsewhere, but this isn't much of a detriment, since most of us who enjoy this cursed hybrid of styles revel in its unholiness, and the band seems to have further developed its lyrical material on the followup.

Ultimately, this is a savage and entertaining debut that fans of Desaster and Swedish acts like Bewitched, Nifelheim and Witchery should absolutely check out. It didn't knock all the teeth out of my face like Antichrist's Forbidden World or Nocturnal's Violent Revenge, but it's confident, competent and carnal enough to enjoy through numerous exposures, and quite consistent in its hellish enthusiasm.