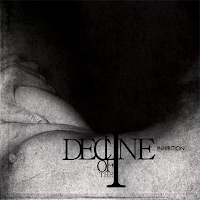 Inhibition is certainly a wonder to look at it, with its merger of lovely, naked flesh to utter darkness, and almost no hint whatsoever to its musical content had I not already read the promotional splash. Turns out that Decline of the I is a minimalistic excursion into the building blocks of the black metal genre, a project created by guitarist A.K. who is probably best recognized as a member of Merrimack and Vorkreist, two of France's harder hitting black attacks. This isn't a solo act, per se, since he's got several other mystery members involved using those single initial handles that have become so popular in European black metal this past decade, but it's certainly a vision which departs from the unbridled, harrowing momentum of his mainstays.

To best describe the sound, take a few of A.K.'s riffing patterns in Merrimack, stretch them out so you can feel each individual chord or note to its fullest, whether consonant or dissonant, and then apply all manner of atmospheric elements to fill in the gaps. You'll experience some droning sequences redolent of an American act like Neurosis or Isis, and also some mildly industrial beats and unnerving ambient effects. Samples are also spread lightly through the run time, often in French, or just faint and distant howls or other tortured reminders that, while never exactly abusive in nature, this music is NOT your friend. It's asylum stuff, like staring at grotesque black and white photography while you attempt to focus your fragmented sanity. Inhibition is never a highly complex record, and concepts like technicality and excess layering are foreign to its ideals, but it carves its own path to your sadness through its overwhelming sense of space and suffering. The riffs will cycle between slow chugs to airier, dissonant bends and spikes, sometimes even omitting metal ingredients altogether (like the more electronic sections of "Mother and whore"), and the vocals provide a multidimensional rasp.

This also requires a great deal of voluntary hypnosis on the listener's part, since the songs are often quite long (7-11 minutes). Decline of the I is not a project you can expect to visit for 3-4 and find illumination. No, this requires some patience to work its desolate miseries upon you, and share with you the hidden world just beneath the humdrum of your daily, repetitive existence. To that extent, its bi-polar depths are functional, creating huge swaths of contrast, in particular between the swells of guitar and the cheesier electronic beats in something like hilariously titled "The End of a Sub-Elitist Addiction". Melody is not an alien concept to this outlet, but don't come to Inhibition seeking some grand, eloquent, infernal parade of riffs (A.K.'s other bands will suit you better in that quest). That said, I did feel that, in an hour's worth of material, some of the riffs might have been built on more unique structures. Many of these seemed pretty typical for drone or drawn out black metal aesthetics, and without the other elements, this might have dragged on a bit much for my taste. However, if you've a palette for recent post-black Blut Aus Nord recordings, or industrial/black acts like Code, CSSABA, perhaps even the less busy moments of Thorns, this is something you should experience for yourself.