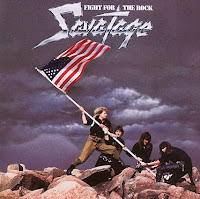 Perhaps the greatest crime committed by the third Savatage full-length is that it stacks up so poorly against all its immediate neighbors, or the band's entire body of work in the 80s. But it's quite a lengthy rap sheet. On the surface, Fight of the Rock continues to take the Olivas and company further into the direction of mainstream accessibility, and this results in both a more harmonic, sterile and 'safe' sound that renders much of its content forgettable. As an EP with 3-4 of its better songs, this is a functional hybrid of heavy metal and hard rock, but there are periods through the track list where there is simply too much inactivity. The banal 'flow' of the record does it no service, and at least 50% of this music is complete scrap.

I'm primarily talking about how they launch us off with the decent title track, loaded with appreciable licks that once again place Criss Oliva's performance front and center. The verse riffs are just as catchy as "Power of the Night", the lead is decent and Jon gets off a few shrill screams in there, plus as cheesy as the chorus might seem, it works. But then, for whatever reason they change up the pacing and seem to become the Beatles ("Out on the Streets") gone horny for 80s power ballads ("Crying for Love", "Day After Day"). Savatage were not particularly awful at this sort of mainstream radio crap, no more so than most of the acts that were making a fortune on the airwaves (fuck off nowadays Bryan Adams!), but let's face it: this was not their calling, even if tracks like "Lady in Disguise" showed a fraction of ambition with their added horns and other instrumentation. Apart from "The Edge of Midnight" with its campy, haunted house intro, or the semi catchy "She's Only Rock'Roll", or "Hyde", which seemed like it would have been a better B-side for Hall of thee Mountain King, there's pitifully little of interest here.

Even the production seems throwaway, a bit murkier and less crisp than on the debut. There's a good deal of atmosphere created through Jon's more cutting vocals, which have plenty of reverb on them to slice straight into the night, but the overall vibe of the album is rarely one of the dark, sweaty streets on the prior album. As for Criss, I'd have to say he has a lower ratio of quality riffs here than any other album (including Streets and Edge of Thorns, two others I'm not fond of). The leads rarely matter outside of the better songs (which I've already named), and even in something like "Hyde" the patterns are a bit lackluster. The lyrics are even more effete than the album before it. 'Get rock dedication?' 'You know you better fight for the rock!' Gah, NO, Savatage. I will not! In fact, this whole album seems like it was compromised of cutting room floor clips that just weren't good enough to include with Power of the Night, especially the wimpier numbers that must have been omitted for feeling 'too different, too soon' from Sirens and The Dungeons are Calling. As if the band and Atlantic wanted to 'ease us' into this family friendly Savatage we could take on a picnic. I'd rather just leave it for the ants to carry off.

Thankfully, whatever fluke juice went into this creation ran dry in the band's veins for their ensuing magnum opus, but I'll be honest with you: I have a hard time even remembering this exists on most days. I can remember a friend and I doing our normal weekend stroll to Strawberry's Records & Tapes, seeing this on the shelf and being surprised it even existed, because no one actually gave a shit. It's almost supernatural in its mediocrity, the most average record ever made, and was a sharp letdown even after Power of the Night, an album that itself had a divisive reaction. I wouldn't dub it 'terrible', per se, because Savatage was just the sort of group which was competent enough to try anything, but it doesn't deserve to bear the same logo on it as Hall of the Mountain King or Gutter Ballet. Not recommended to those newly exploring the band, and if you're really all that curious, just YouTube the title track, maybe "The Edge of Midnight" and call it a day.