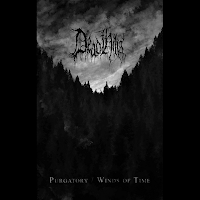 Dead Hills proves to be yet another voice of potential in the opulent, emerging Australian black metal scene, but the take on this substantial double-disc demo offering is somewhat differentiated from its neighbors. For example, you won't find the sweltering, claustrophobic clamor of a Striborg here, or the strident, echoing atmospheres of Drowning the Light, Temple Nightside and Atra. Purgatory/Winds of Time has a more directly Scandinavian interpretation of sorrow and madness, and comparisons to forebears like Burzum, Vinterriket or Ildjarn, due not only to the tortured, screaming vocals, but also to the mesh of simplistic synthesizer ambiance with the primordial riff structures, and the nature obsession implied through the lyrics and atmospheric vistas of suffering.

That this is the product of just one musician, and that said musician, Weaver, manages to maintain such a high level of consistency through over 90 minutes of material left me nothing short of awestruck. Granted, there are a few of the lengthier compositions like "Wells" and "Leaves of Ash" which might have benefited from a few minutes' trim, but in general the balance between the majestic and desolate keyboard phrases and the ghastlier black metal sequences is well rationed. Weaver never lets the repetition of any one riff get out of hand here, constantly integrating melodies of grandeur and sadness to complement the primal fuzz of the rhythm guitar. The drum sequences will often drop out entirely and allow for the guitars to generate an epic, wilderness haze before returning, and there's a decent variety of faster paced tremolo surges and languorous, drudging chords that ramp up the demo's capacity for a chilling, enduring aftereffect, as you experience in the mournful segues of "The Wilt" or the more graceful, expansive heights of "Leaves of Ash". There are also some periods in which the guitars become more melodically busied than one would normal associate with this niche, but not at all to the music's detriment.

Needless to say, the intros and interludes here are equally scintillating and varied, from the more psychedelic beaming keys of opener "Clearing", to the muddied bass of "Haze", to the solemn twang of the clean guitars that course through the finale "Graveyards Over the Sea". The production of the demo is perfect for what the project represents: isolation, sorrow and obscurity. Delivered with more evenness and clarity than its stylistic ancestry, perhaps, but not at all a negative when one is expecting to sit through an hour and a half of such material. It's a fraction more accessible, than, say Filosofem, but not as robust, polished or punchy as a band like Sweden's Dråpsnatt, which also draws upon that Burzum heritage. The vocals, riffing patterns and overall atmosphere are hardly a novelty in this genre, but when handled with such respect, who cares? Ultimately, Purgatory/Winds of Time takes the listener on a shadowy expedition through the natural world, and I enjoyed that each of the two discs offered a separate, personal, lyrical journey (the first a darkened woodland, the second more of a sea meets earth euthanasia). The pacing is great, the songs suffice even when extracted from the whole, though they work best when you've got at least 45 minutes to spare.