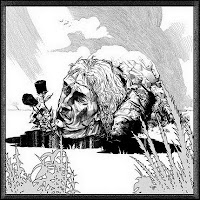 Having explored the latest Spectral Lore album Sentinel before this split, I can't say I was quite so surprised at the level of quality on exhibition. However, there were a few tonal shifts in Ayloss' offering here that diverged ever so slightly from the full-length, and I was likewise impressed by the pairing with another promising act called Locust Leaves, whom I've never heard before, but match up rather well in terms of the effort and ambition they bring into the black metal spectrum. Each of the bands has penned a massive composition for the split, two tracks clocking in at nearly a half-hour, and they give us a good glimpse of what makes the clockwork of each project tick.

Spectral Lore's offering, "Duty" opens with warmer melodic textures than I'd expect, but reeks of a similar, fell glory to Bathory's later 80s/early 90s material, or perhaps the more matured, mid-paced Immortal. That said, it's still a veritable riff-fest, eventually gathering speed to gallantly escalate into a mountainous crescendo, before coming back down to a calm segue of acoustic guitars. The vocals are mildly less ominous and guttural than I found on Sentinel, assuming more of a thicker, Burzum-esque, tormented rasp, which is complemented with various, cleaner, narrative passages for variation. While I think ultimately I preferred the full-length's calculated, schizoid sense of purpose, I must say that the last 5-6 minutes of this 15 minute monolith, with the lilting leads and the closing ambiance, were breathtaking. By comparison, the companion piece "Promise" by Locust Leaves, is more dense and in your face, lacking some of the airiness that Spectral Lore revels in. Sensual, whispered periods of tranquility are alternated with harried with blasting, bloodsoaked, gruesome drums and vocals, but the band also creates an enormous atmospheric bridge with clean, melodic vocals and guitars that reminds me of a more tormented 90s Anathema.

All told, we're getting a glimpse here into two of the brighter, more comprehensive acts in the Greek scene which should be taken notice of, since each has a highly defined, refined sense of expression you're unlikely to experience in the more primitive Hellenic underground. I wouldn't say that I enjoyed this split riff-for-riff, since a few of the note progressions lost my attention, but especially in the case of Spectral Lore, which is a single man performing all instruments, the effort is incalculable. The production's a bit better balanced on "Duty" than "Promise", or at least more to my liking, but otherwise the two acts pair up quite well. Fans of atmospheric, experimental black metal which doesn't shy away from dramatic, emotional effect would do well to pursue these names.