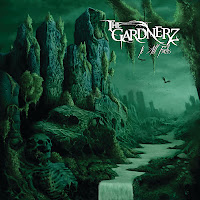 While it wasn't in of itself a highly impressive album, The Gardnerz' 2011 debut The System of Nature brought a riffier breath of fresh air to the doom/death spectrum, one that needed only some mild refinement to push the band into a more memorable terrain. Enter It All Fades, the Swedes' followup recording, a 36 minute EP which flavors its marginal brutality with a number of eclectic departures that work wonders for its overall presentation. Not only are the group's heavier compositions all the better for the improved structure and guitar progressions, but this also contains one of the most beautiful cover songs I've heard in 30+ years of my conscious awareness of rock and metal music...

Where many of the bands who cross the streams of these two extreme genres depend heavily on slow, dull and bludgeoning rhythms to impart despair, The Gardnerz would rather keep themselves, and their listeners interested in what's happening. Many of the guitars here are, if not complex, quite busy, almost a progressive death metal which recalls sources as wide as Death and Opeth. They'll occasionally evoke some simpler doom harmonies or dense, thuggish chord patterns (as in opener "Don't Look Back"), but it never once gets to the point where you feel tired or exhausted of arbitrary repetition. The vocals are your stock guttural that you'll recognize from a lot of Swedish or Finnish death, but these are joined by more tormented barks and even the use of female guest vocals for an operatic fix. The EP has a clean, but fertile mix which allows you to easily comprehend the guitars, while the rhythm section provides a taut dichotomy of smooth bass and snappy drums. The clean guitars also sound eloquent, and the music they write with them is actually catchy, rather than just placed into the tunes for appearances.

However, what really drew me to this disc is the band's lavish interpretation of Darkthrone's "Transilvanian Hunger", which has been converted into a gorgeous, glimmering and wistful folk track with the lyrics intact, performed by female vocalist Paulina Strihavka, who also adds the operatic lines to the title track. You'd think a transmutation like this would solely rely on its gimmick, but there's nothing at all tasteless, ironic or patronizing about how The Gardnerz translate this beloved, bestial classic. The original chords are wrought out in solemn, river-floes of acoustics, and the contrast of Paulina's voice with the lyrics is strangely effective. It's possibly the best folksy incorporation to an extreme metal album I've heard in quite some time, and though it's not really representative of the Swedes' original compositions, I haven't stopped listening to it since I first experienced it. Otherwise, this is all solid material, more fetching and interesting than on The System of Nature, and I look forward to the inevitable sophomore full-length, crossing my fingers actually that they'll incorporate more of the folk, if you can believe that.