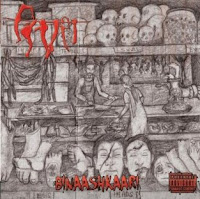 Nepal! Not a place I hear from often, and not a place with an enormous metal scene; of the few groups I've seen listed, Binaash members have probably been involved with half of them. As a student of metal culture the world over, always learning new sounds and new places, I was immediately interested by what I'd find. The gruesome, primitive art work and the shocking iconography of the band's Devanagari scripted logo warned me that I was not in for the most pleasant of experiences, but as it turns out, Binaash ('destruction') have a pretty good sense of humor, and this translates into their hybrid of caustic grind, splatter thrash and gory death metal aesthetics.

By looking at the album, and acknowledging the group's independent status, I wasn't expecting it to have high production standards, and this is probably the one area in which the album is most lacking. The guitars have a loud, crunch tone to them which almost blew my ears out, and also tends to drown out or overpower the cleaner precision of the drums. The guttural vocals are delivered with a very percussive inflection that benefits from the layered grunts and barks, and the bass is nearly as boxy as the guitar, especially when you hear it on its own (the beginning of "The Wests", for instance). Overall, it's pretty chunky to the point that it sounds like it could've been far better mixed, more atmosphere might have better serve the lethality of the brutal songwriting. There were also lot of intros to the various tunes, many of which involve fucking around and making wild animal noises, but occasionally you get a surprise like the acoustic intro to "Nihilist" or the spectral screams that initiate "Eerie Sentiments"; still, I'd have preferred if a few of the tunes just outright launched into one another for continued chaos.

These gripes aside though, Binaash can play their instruments, and they can also beat your head in with those same implements time and time again. Loads of slamming, chugging grooves reminded me of everything from Suffocation to Pestilence to Morbid Angel, and these things are simply loaded with riffs, even if most don't feel highly original or memorable. You'll get some clinical, evil thrash passage threaded through the beatdowns. Where many bands that cross over death and grind elements subsist off shorter tracks, Binaash can write them at 4-5 minute lengths and consistently be changing up the muted ballast. In particular tunes like "Eerie Sentiments" and the hyperactive, blasting matrix of "Gravitational Imbalance" were quite fun, and they hurl in crazier, higher pitched guitars, madman howling (as in "Bancharo"), whacky chord progressions ("Waak"),  and other measures to keep somewhat varied, even if the limited production hinders them from sounding as brash and visceral, as, say, Wormrot or Napalm Death.

Did I love Binaashkaari? Probably not, due to the relatively fugly tones that kept me distracted from more closely following the rhythmic charges and churns. In addition, though they've no shortage of ideas for the riffs, most of them roll right off you. However, the album's blunt edge cannot be denied, nor can the abrupt, acrobatic talent of these Nepalese musicians. Get these guys centered into a better studio setup, and the East is going to have yet another rising force fueled on thuggish, unbridled mayhem.