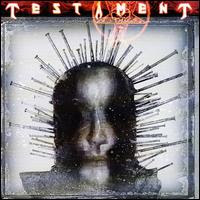 Almost universally reviled as the nadir of its existence, I have to say that Testament's seventh album Demonic might be the recipient of some arbitrarily overinflated argument and hatred. It's not a good album, mind you, easily the worst of their career, but it's wrought from a few 'what if' scenarios that might have worked well enough if implemented alongside stronger songwriting. As it stands, there are a handful of songs here I enjoy, and the rest are vapidly uninteresting; and yet, if we take this into perspective, and compare it to West Coast tripe like Cryptic Writings or ReLoad released in the same year, it practically becomes a manifest for good taste. Whatever its crimes, Demonic still sounds reasonably like Testament, rather than a new band entirely, compromised for ticket sales or radio exposure.

Demonic is the group's 'death metal' album, by which I mean it's not actually death metal, but possessive of guttural vocals. Chuck Billy introduced this style on songs like "Dog Faced Gods" on the previous album, so it's not as if they were unprecedented or surprising, but the fact that he uses them as the rule and not the exception might have evoked some dissatisfaction in those fans enamored with his more muscular take on the Hetfield style. In other words, you won't find much melody here aside from some chorus lines in "New Eyes of Old" or "Ten Thousand Thrones", and it might prove a deal breaker. While broadly guttural and abusive, Billy has a tendency to veer towards the monotonous with too many repetitions in this voice, and without might, memorable riffs to support him in this venture, the transition to the growls is not so successful. That said, the bigger problem for me on this album is the lack of truly great songs. The riffs feel more saturated with industrial nonchalance, and lack that ominous, larger than life impression I use to take from their classic 80s works. About 50% of the chugging note progressions on this album are dull as watching the text scroll by on your local town Cablevision channel.

It's not without a few positives. For one, the revolving door of the band's roster had spun once more, with percussion god Gene Hoglan (Dark Angel, Death) replacing John Tempesta's short-lived position as he flew off to a greener pasture (White Zombie); and you can tell, because while they're hardly the most complex or exciting beats and fills he's laid out for an album, they handle each leaden groove meticulously. Greg Christian had also disappeared, but they kept his bass slot 'in the family' by drafting up Derrick Ramirez (who had played with the band in their earlier incarnation Legacy). A few of the songs are actually quite decent, in particular "Demonic Refusal", with its faux-Satanic reverse countdown intro and incredible breakdown grooves. Both the chorus and the later rolling double-bass sequence in the bridge are incredibly slammable and entertaining, and it's no wonder such a strategy became mandatory for just about every metalcore act you could shake a Vegan jerky at over the ensuing decade. You can feel this song right down in the center of your stomach, where it repeatedly clocks you with combination punches, and the other highlights of the record, like the cheesy "Jun-Jun" succeed largely because they are similar in nature.

Unfortunately, Demonic is not a single or an EP, but a 41 minute full-blown album, and there are painfully few moments of it that earn their keep. If you're just seeking something caustic, unfeeling and pummeling like a giant that drags its knuckles through a mountain pass, then this might fit the bill for a few listens. It's heavy for heavy's sake, and it's chugga chugga bruise bruise all night long. The 'death metal' elements that so many credit to this record are primarily in the vocals, a few of the breakdowns, and an occasional spike of tremolo picked evil (as in "Murky Waters"), but they're not necessarily the dominant aesthetic, which is instead a sort of fist-balled brute-thrash made for pit fightin'. If your life consists of 'mosh first, metal second'; that is to say, windmill kicks and shoving girls and other man-children around to sate the blood lust you can't express at your warehouse or mall job, then I think you might likely consider this the 'greatest' of Testament. Otherwise, it's a crushing average, not nearly so inspiring as any of the albums that came before or after, with a well of cute gimmicks that runs dry all too quickly.