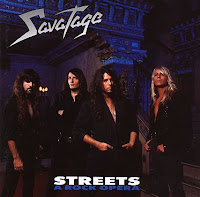 Streets was the first unified concept album from Savatage, to be later followed up by titles like Dead Winter Dead and Wake of Magellan. While there were certainly some recurrent themes on prior efforts, this is the first case of an actual, straight narrative coursing through. They wrote up a bunch of characters and a sequence of revelations and events that would create the same level of drama you'd find in an old Broadway show, so of course it's set in the stereotypical New York City location with a story of drug dealers, poverty, and redemption. To be fair, this is by no means an awful album, and it largely continues the legacy of its predecessor Gutter Ballet, but therein also lies my primary issue...

I already got just about all I need, or could ever desire of Savatage performing this transparent, sentimental 'sorry for myself' pandering through tracks like "Gutter Ballet" or "When the Crowds are Gone". All Streets really ever amounts to is "Gutter Ballet" expanded outwards into nearly 70 minutes of inconsistent material, some decent and some swill. Sure, there are some touching moments for our protagonist D.T. Jesus in this story, but it's hard not to feel like the Floridians are projecting here, that this is somehow about their own addictions and coping with the fact that they just weren't seeing the critical and financial success they had deserved (and they did, with Hall of the Mountain King and Gutter Ballet). Granted, most musicians are reaching for the same personal space when creating their art, but I just couldn't shake the impression that this was a safety pitch meant to walk or single the batter up to first base. Aside from the narrative solidarity, there is nothing new here which wasn't already performed better on the previous album, and though I do love a handful of the licks, the endless tirade of piano balladry puts me to sleep (I'm sure it does wonders if played in a TSO set, but I don't listen to that band).

I could compact my personal highlights of this album down to about 20 minutes. "Sammy and Tex" is a nice, dirty speed metal piece with some guitar acrobatics. "Ghost in the Ruins", "Agony and Ecstasy" and "Jesus Saves" have hooks that are impossible to deny, and the orchestration and dark vocal arrangements of "Streets" itself are also quite impressive. Apart from that, I have to pick and choose moments of interest, because uplifting bedtime pieces like "Heal My Soul" and "Believe" are lost on me. I'm a thoroughly evil human being, after all, and the thought of children holding hands and singing hymns to Jesus or their orphan matron are most repulsive. I would have taken after Gargamel if he wasn't always getting punked by blue fairies. My children will listen to Marduk and (early) Gorgoroth as I rear them to become despots and fiends. I rarely speak in this same, sweet emotional language, so it's not often a banal radio ballad is going to effect me. I laughed a half dozen times when I first heard this album at the ripe age of about 17. Savatage seemed to me on the precipice of becoming pansies, sprouting petals...while I was privately crossing my fingers for a few Sammy/Tex rematches.

The production here didn't seem nearly so powerful and effective as Gutter Ballet, either. Oh, it's plenty atmospheric, and there are places where you feel like you're out on a city street with snow trickling down on you while surrounded by Holiday wreaths and lights, but the rhythm guitars are often too subtle behind the grit of Jon Oliva's vocals, and the keys here seem a little overdone, where they were an excellent addition to the prior albums. The drums and bass hardly have to do a fucking thing, so simple are most of these tracks, so they're never exactly a factor beyond their vapid rock pummeling. A lot of the leads are teensy, more like little melodies you'd find on an AOR track, and most of the songs move along in very predictable chord patterns, with a dearth of those savage grooves that I so lusted to hear. In the end, this is a soap opera with a few watered down ideas from Gutter Ballet spent to exhaustion. I mean, where's the power? I want "Sirens", man. Fuckin' "Legions". "By the Grace of the Witch"! Where do you go after such a drippy album as this one? Christmas carol covers with guitar solos? O.o