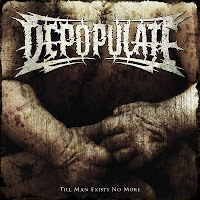 Depopulate is a new band of brutes sprouting up in the crowded Polish scene, but while they certainly possess a comparable level of aggression to their countrymen, they seem to practice a more crude and percussive style, stripped down from the richer production elements to a basic core of bludgeoning breakdowns, loads of double bass footwork, murderous but somewhat monotonous gutturals, and some occasional bursts of slightly more complex riffing sequences. This is not so much like their locals Vader or Behemoth as it is a primal approximation of US legends like Suffocation, Dying Fetus, Cannibal Corpse and Devourment diluted into a thuggish, live sense of sincerity.

I've got to say that this is not an incredibly musical release, just a brief, 15+ minute explosion (including the gruesome torture intro) that delivers its points at the ends of balled fists. The guitar has a very wooden, boxy tone to it which emphasizes its battering quality, and many of the muted note progressions are dressed up in squeals and other fills to add a bit more flair. Later tracks like "Wastesoaked" and the hilariously titled "Show Me the Way to Your Heart" stir up more of a rhythmic frenzy with solid blast beats and tremolo guitar patterns, but unfortunately a lot of the breakdowns throughout this album (like the middle of "Show Me...") feel like they've been recycled from decades of death metal, hardcore and hybrids of the two. The brute vocals are occasionally joined by a higher pitched snarl in true Deicide fashion, but beyond matching the band's sense of imminent, percussive anger, they don't really do all that much out of the ordinary. The bass guitar also didn't stand out here, whether it's because of how it's mixed or just that the lines don't often escape the guitar progressions.

That said, Til' Man Exists No More isn't exactly a bad recording, it's just very stripped to the fundamentals and exerts no real creativity beyond the constraints of its genre. If you want an immerse yourself in some total package, epic and atmospheric brutality then you'd be better checking out Lost Soul or the latest Vader. This is more of a pure slugfest, a boxing match in which blow after blow are delivered ruthlessly to the face, gut and kidneys in desperate athleticism. Depopulate seems tailor made for a mixture of the slam obsessed and those into the more brutal old school USDM of the mid 90s. Some might scoff at the lack of polish to the EP's production, but I didn't mind that aspect whatsoever. It's the very definition of blunt and honest, and the music propels itself along quickly and directly enough that it never goes boring, even despite its most derivative riff cycles. However, I think they've got plenty of room with which to develop their chops, and perhaps write some catchier, surgical guitar progressions to better complement the concrete underbelly.