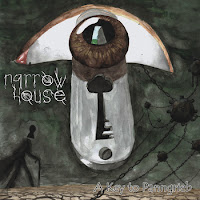 Though Ukrainians Narrow House hail from a tradition of soul leeching, somber funeral doom, the sound they've adopted for their debut A Key to Panngrieb is actually far brighter, more atmospheric, and their wise incorporation of instruments like a cello and synthesizers helps give this music a far larger breadth than if they had merely trudged along with the same lifeless, disaffected lurch as so many others in this niche. Granted, this debut is not incredibly menacing or sad. It's also not riff-heavy: the simple structure of the chords functions as little more than foundation for the guttural resonance of the front man, while the orchestral swells and ambient passages provide that extra 'push' preventing the heavy limbs from a festering ennui.

So spacious is A Key to Panngrieb, that you can discern each snare, cymbal and kick of the drummer, as if he was storing up all this pent up emotion and aggression into the most minimal of strikes. The bass strums along like the failing pulse of a dying heart, full but at the same time quite sparse over the raw banks of the guitar distortion, while the cello plucks along like a chamber musician witnessing one of Edgar Allen Poe's liquor fit depressions. The vocals are a pure growl, something like Shape of Despair where he lets his intonation ride out over each syllable in time with the drudging undercurrent, but they often take on a higher, rasped pitch, or even sink into a guttural mumble. The keys definitely create an otherworldly choir of sadness through their own simple repetition; never complex or intricate in terms of their composition, more like a procession of mourning angels slowly swaggering to the precipice of some eternal pit and then thrusting themselves down to its depths with mechanical precision. Guitars do often pick up pace to a flood of chords or chugs, as with the closer "Под Маской Этой" (a cover of Esoteric's "Beneath This Face"), where they even lovingly tease a blast beat...

However, I wouldn't have minded more variety to these patterns, perhaps more implementation of sad, swelling guitar harmonies that could even play better off the cello. Like most albums in this type, A Key to Panngrieb fights an uphill battle to remain interesting across the 11-14 minute long songs that represent 75% of the track list. I actually liked the extended intro to the album, with speech samples, brooding synthesizers and low piano hits; I also thought the production was excellent, nothing murky or difficult to process; and the surreal artwork is quite compelling. But with music that moves so slowly, I feel like the chord progressions need to be incredibly capable of conjuring despair, and these were just sort of average in doing that job. Narrow House succeed here by virtue of their enormous atmospherics, but they've got plenty of space in which to further experiment. I wouldn't necessarily recommend this to fans of the more dry, psychedelic droning doom inherent to Skepticism or Thergothon, but more to those who like the simpler, mourning crush of Evoken, Shape of Despair, perhaps even My Dying Bride.