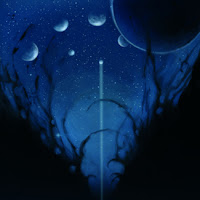 Alas, another throne has been usurped, and I have found myself once more late to the coronation. Though one of my co-bloggers covered the Spectral Lore sophomore II a few years back, Sentinel is actually my first exposure to the Greek act, and it's by far one of the most ambitious and evocative black metal recordings I've heard this year, combining the far left chaos of explosive, quasi-experimental fiends like Deathspell Omega and Dodecahedron with the stronger sense of fundamental melodic tremolo picking and grandeur possessed by Norse acts through the 90s: Mayhem, Emperor, Immortal, Satyricon and Enslaved. A one-man symphony of staggering ability, and an unpredictable landscape of dissonant miasma and floods of overwhelming rapture.

Sentinel is a nightmare embodied into airy flights of sinister, streamed tremolo guitars, meticulous blasting and ominous growls and rasps so insidious that one might feel one has attracted the ill favor of the Olympians on high, just waiting for whatever curse they send down upon you. This is heavily textured music, and it's incredibly rare that you'll find only one thing happening at a time. The guitars are tracked with much nuance, crisp and bleeding note progressions that almost entire evade the burden of derivative placement. There is a tendency towards orchestrated acceleration throughout the whole of the album, but Spectral Lore can also settle into a slower, progressive groove like "The Coming of Age" without losing a fraction of intricacy. The riffs whip around the listener like the tethering tentacles of some Cyclopean, otherworldly lifeform, gradually sucking him or her into a hidden pocket of reality. The drums alternate between eruptions of unbridled violence and jazzier fills and rhythms that maintain a substrate of complexity even when one strips away the adventurous guitars. The vocals are threatening and petulant, even though their presence is often too sparse, but part of this is that over 30 minutes of the album have been committed to a single ambient track...

Which might have proven a detriment, if "Atlus (A World Within a World)" wasn't one of the most lush and impressive pieces on the entirely of the album. A contrast to the cavorting, evolving chaos of the metallic compositions, perhaps, but incredibly gripping, and aesthetically flush with the album's gorgeous cover art. It's like starting off some mystical evening with an incendiary, psychedelic, structured black metal jam session and then having Peter Andersson of Raison d'être show up to score the after party, when all the maniacs are stoned on a grassy hillside, grazing on celestial bodies. That Spectral Lore's sole author of pain, Ayloss can shift from one extreme to the other without losing focus or sacrificing quality is something baffling to me, and yet here it is, scrawled out across the firmament like a nebula of nihilistic ravens. Sentinel holds up after numerous listens, with more pieces of its puzzle unraveling aurally and existentially each time. Every calm and every storm dwells upon the imagination with a supernatural contemplation. Don't expect a Triarchy of the Lost Lovers here, or Scarlet Evil Witching Black; apart from the mystical fabrics of, say, Acherontas, Spectral Lore doesn't have a lot in common with their classic countrymen. But this is by far the best record to hail from that scene in nearly a decade.