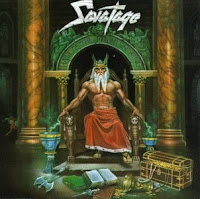 Not only one of the best 'rebound' records in metal history, but one of the most poignant and memorable excursions of all the US power/heavy efforts I've ever heard, through the 80s and beyond. Savatage might have just written up another Fight for the Rock, pursued the path of extinction in vain, for a market penetration they were unlikely to achieve; but they turned everything around and gave us their heaviest album yet, surpassing their earliest works Sirens and The Dungeons are Calling with ease. While the Floridians might not have had the same pull as a Slayer, Megadeth or Metallica, Hall of the Mountain King was a pretty popular album where I came from, enough that it slipped across the bounds of the 'mainstream metal' culture and was a topic for much discussion. Frankly, though, this deserved far more than even that, because it is damn near perfection and has that rare ability to transport the listener straight back to wherever he or she was the first time listening.

Sheer escapism cloaked in fantastic themes, and yet tethered to the deeply personal traumas of reality through hymns of addition, lost love and suicide. Hall of the Mountain King might have transformed Savatage into a Jefferson Airplane for my generation if only a few hundred thousand more people had been paying attention, instead of stroking and hairspraying themselves, adjusting their shoulder pads in the mirror while they listened to "Wanted Dead or Alive" and nervously anticipated prom drama. The writing is intelligent, tortured, and sounded like no one else out there at the time, unless we're counting Savatage themselves. I don't think I've ever heard Jon Oliva traipse along the margin of sanity and sorrow so closely, not even on the more 'emotionally' driven, accessible rock opera albums that followed this one. He's actually using a lot of higher pitched screams and howls through this record, more than the earlier works, and does a lot of double tracked barking in tunes like "Legions", which only adds to the pervasive asylum aesthetic dominating the overall atmosphere. I'm not saying he's got the range or capability of the more popular English royals in the field, but when he sustains a shrill shriek it will chill you like a morning mist in November. When he and guest Ray Gillen partner up for the chorus of "Strange Wings", try not to cry!

Hall of the Mountain King has, hands down, one of the best guitar tones I've heard on ANY metal album, rich and rustic in both power and feeling, like chopping wood out back of a cabin on the mountainside. He brings forward a lot of the hard rock grooves that were prevalent on Sirens and Power of the Night, but they sound far nasty in the context of "24 Hrs. Ago", where the muscle the listener immediately into submission for the remainder of the runtime; or the estimable bad assery of "Legions". At the same time, he also lets the chords air out through a more tender, melodic number like "Strange Wings", and the chugging sounds intense without any unnecessary level of overdrive. Clean, harmonic picking also sounds ripe in the intro to "Beyond the Doors of the Dark". The leads burn throughout with this feral, bluesy emotion, but Criss Oliva also flexes his classical shredding chops in the cover of  Edvard Grieg's "Prelude to Madness", the setup for the title track (also created in tribute to the Norwegian composer). And as we all know, that very metalization would later inspire the band's Dead Winter Dead concept album, and the ensuing, groan-inducing Trans-Siberian Orchestra, which would make them a LOT of money.

Perhaps I'm just a dick, but the rhythm section never exactly stood out to me in Savatage, probably due to my rabid Criss worship. That said, I fucking love the production of the drums on this record. You can feel each of Wacholz' kicks on your spine, and the guy has such excellent restraint, placing only the most minimal, effective fills on the stopping/starting phrases in cuts like the speed metal "White Witch". I couldn't always make out the bass very well in places, but in others like "The Price You Pay" it thumps along like a champ. Johnny Lee Middleton shows a lot more technique here than Fight for the Rock, and I almost wish I could hear the coiled, open power of the low strings even more. Hall of the Mountain King also has what must be the best use of synthesizers ever, performed by Robert Kinkel; quaint and subtle in support of the meaty rhythm guitar chops. There are a lot of ambient effects, bells and quiet choirs dispersed throughout the record to give it that sense of utter grandeur, and yet as soon as the guitars bluster out some manic riff like the intro to the title track, Savatage brings you straight to ground and then beats you in the spleen with a warhammer.

Unlike Sirens, Power of the Night and Fight for the Rock, there is absolutely ZERO stupidity to be found on this record. Granted, "Legions" and its 'metal storming masses' does mirror the whole 'metal children' anthem that the band had used a few times in the past, but it feels so much more serious and aggressive through the riffing delivery. But in terms of hooks, choruses, and lyrical delivery, this is nigh on spotless, and the band even goes above and beyond excellence when they escalate into Jon's screaming refrain in the "Hall of the Mountain King" bridge, or the bass-driven progressive rock grooves cutting through "24 Hrs. Ago". The topography of the songwriting is gorgeous, with peaks and valleys, glories and depressions that keep each track interesting throughout. The one possible exception is the closer "Devastation", which has some tremendous grooves and melodies coursing through the verses, and a very Maiden-like discourse of guitar and bass tucked into it, but seems a fraction less revelatory than the rest of the music (still better than most of the Savatage material not on this album, though).

I'd note that this is really where Paul O'Neill became heavily involved with Savatage; the man who would essentially become one of the visionaries behind their development, not merely a producer. This is easily the best album he's ever produced. The Gary Smith cover art is incredibly iconic, its bare-chested, bearded overlord firing off lightning bolts into a pair of flanking braziers, while a goblin jester looks on from the shadows. As a role-playing freak eagerly awaiting the 2nd edition of AD&D, I really wanted to travel this world, to fight this guy, to swipe up that axe, that dagger, and the chest of treasure here; but make no mistake about it, Hall of the Mountain King is no dweeby, laughing matter. It's an ageless phenomena, an album I never grow tired of hearing, and the clear summit in their body of work. The biggest downside to this record is following its lines of succession, watching everything slide downhill as the band took its interest in rock opera narrative to new heights, and then suffered an unimaginable tragedy. But this one album, this one place, this one time, this one statement, is eternal, and how could I ever truly look down on a band that gave me such a gift?!