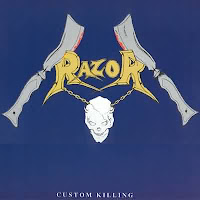 Razor is about the last band on Earth I'd expect to tackle epic length song structures, but indeed that is one of the defining characteristics of their fourth LP Custom Killing, at least on two of the central pieces, "Survival of the Fittest" and "Last Rites", both of which are 11 minutes in duration. Kudos for the Canadians for trying something different, and in truth they do help break up the record, so as to not repeat the brash attack cycle of an Evil Invaders. But unfortunately, it turns out that the band doesn't work their best in such a format, since the endless parades of riffs Carlo is churning out in these thrash-whales seem as if they've all been played out on others songs, and nothing really interesting occurs as they bounce back and forth between stock speed metal and the upper momentum, with the possible exception of the more atmospheric, open riffing used in segments of both.

I'm also not into the frenzied "Russian Ballet" rock polka outro, so pretty much any fun I was going to have with this record was relegated to the other five tunes, which range from 4-5 minutes of livid, battering old school speed metal. Tunes like "Going Under" and "Forced Annihilation" are pretty standard Razor fare, with high velocity chords, palm mutes and even some darker tremolo passages in the latter that hinge on a death metal aesthetic. "White Noise" is generally more acrobatic and shifty in terms of its tempos, and "Snake Eyes", with an intro that most would consider pretty racist by today's standards, is pretty much what Possessed would have sounded like as a punk band, Sheepdog's menacing inflection barking out over a pretty basic procession of chords. Ultimately, I don't think there's a single song on this album that I'd place on a highlight reel of the band's discography, but they don't break character for much of the playtime, and there's nothing all that depressing if you've a hard on for Executioner's Song and Evil Invaders.

Custom Killing has a looser feel to its production than any of the previous albums, not nearly so spiffy and audible as Malicious Intent. The guitars are good and chuggy, especially when multi-tracked, but the bass here is extremely plump, and often the nuances of the leads and melodies get lost. Otherwise, it's workable and airy, but my least favorite mix they'd achieved to its day, even if it's not a far cry from its neighbors, and some of the murk of its tone would be transferred forward to the band's magnum carnage opus Violent Restitution. Sadly, while this doesn't break rank, there's also the retrospective burden of knowing just how damn excellent this record's successor would be, superior in every respect, Razor returning to the abusive speed and no-nonsense thrashing brawl that put them on the vests and jackets of generations of adoring fans in the first place. I used to enjoy Custom Killing more when I was younger, but it simply hasn't aged as well as the rest of their '84-88 material, and I rarely feel compelled to break it out of its own jacket. Along with 1997's Decibels, it's very much skippable.