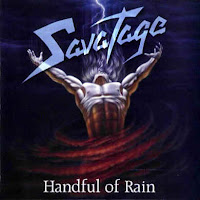 In all honesty, Handful of Rain would have had to commit identity theft on me, clean out my bank account, post compromising pictures of me all over the internet, run my pets over with a car, punch my mother, and steal my girlfriend for me to have liked it any less than Edge of Thorns. And yet, somehow, miraculously, it manages to commit all these acts of hatred upon me and then some. Depending on which way the wind was blowing on any given day, I'd have a difficult time deciding for myself whether this or Edge of Thorns, was the worst of Savatage's studio outings, but I think for now I'll accept that this was their career nadir; here is nearly no saving grace whatsoever for its miserable hide.

I won't even launch into the 'too soon, bro' argument, because even though Handful of Rain was released less than a year after Criss' car accident, I have the feeling he'd have wanted the band to forge ahead and make what they could out of themselves. Needless to say, one only has to suffer through the 49 minutes of this album to see just how undeveloped and uninspired the music is. Savatage brought over Alek Skolnick, who had recently departed from Testament, which was sort of a strange, unexpected move. Granted, there was the Atlantic Records connection, and if you're going to replace one guitar god, why not use another, but even Alex himself has admitted he always felt a disconnect with the Floridians. Ironically, his spurious leads, written very much in the vein of his alma mater, provide a few of the only interesting moments throughout, because he doesn't seek to emulate his predecessor so much as give of himself. Unfortunately, the rhythm guitar patterns, and the songwriting itself, is so exhaustingly dull that there's no real impetus to pursue them.

Once AGAIN, the overabundance of crappy AOR/prog-rock ballads dilutes the potential of a Savatage record. "Handful of Rain"? "Stare Into the Sun?" "Alone You Breathe"? Parts of three other songs? All shit, with no catchy choruses, just acoustic guitars morphing into bland chord progressions, pianos for dramatic effect, and lots of Zak Stevens attempting to add a fraction more bite to his timbre. Even where the album gets 'heavy', like the boring, hammering sleeze/groove-thrash of "Taunting Cobras", the guy sounds like he's attempting to ape hard rock singers like Sebastian Bach. I will say that Stevens gets a little more comfortable in his role, and I found him less grating overall than on Edge of Thorns, but apart from a few ambitions like his multi-tracked Freddy Mercury countervocal sequences in "Chance", he's just not the singer I want to hear in this band. Then again, I doubt Jon's presence would have made much of a difference over crappy Ozzy meets Black Label Society grooves like "Nothings Going On" or "Taunting Cobras" (which is a waste of a decent song title, if you ask me).

Production here is admittedly a little less sterile and billowy than the previous album, forcing the guitars to come across with more savagery, and I think a better mix of the vocals with the music. I no longer feel like I'm sitting in the studio booth next to some nervous guy trying out for a Broadway rock opera. The skins get hit pretty hard, and I've got no real problem with the rhythm guitar tone or the bass.Skolnick's flighty leads on tunes like "Taunting Cobras" are pretty slick, but without a proper vessel to steer them they just seem like mercenary excess, a hired gun wanting to prove himself after leaving the group which made him a name in the first place. I've read that Jon Oliva actually recorded most of this record himself, which might explain why it feels so piecemeal compared to past works. Ultimately, Handful of Rain suffers from its ill-advised, lamentable compositions more than any other facet, to the point where it's not merely a forgettable Savatage album, but downright bad. They should have let this alone to begin with, or if they were insistent, attempted something more unique to pass the time (a full album of material like "Chance" would have at least been different). But no. The album just sucks. I appreciate the persistence, and really anything in tribute to a great, fallen musician, but this is one cluttered breach of confidence.