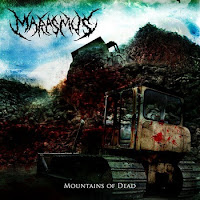 Much like the catastrophic tornadoes that often strike at their native Missouri soil, Marasmus perform in a very pent up vortex of hostility that, if one is not careful, can easily snap you up in its violent winds and proceed to break every bone in your flailing frame. That's not to say that they're any more explicitly unique, barbaric or inventive than many others in the spectrum of USDM, but their debut Mountains of Dead works up enough of a dynamic sweat that both the slam set and those followers of faster paced, acrobatic technicality will find it effectively taxing. Loyal to the obvious influence of a Deicide, Morbid Angel, Suffocation or Cannibal Corpse without ever coming off like some exacting derivative.

This is achieved through tightly reined compositions that primarily hover in the 2-3 minute bracket and fire off dozens of dizzying rhythmic configurations against the backdrop of blasted snares and athletic footwork so harried it seems like there must be 2-3 guys playing it. I can only imagine how much endurance it must take to rifle through a set of beats like these without your limbs giving in on you with fits of rebellious convulsion, but Trynt Kelly levels this kit like whatever storm hit the heaps of bodies on the album cover. The vocals are kept blunt and guttural, not exactly novel or compelling on their own, but occasionally affixed with additional snarls and background gurgles that add another dimension of serial killer intensity. The guitars, meanwhile, focus on a very intestine-churning tone that spins into this surgical excision when they race up and down the frets in callous contortions; and the leads are mixed with just the right level of effect to help them strike out above the concentrated clamor like a flight of eagles warning one another of the impending stormblast.

Still, Mountains of Dead does suffer from the setback that its twisting, turbulent nature never aligns itself with strong enough songwriting to its brand upon the listener's skull. Only the signs of actual impact. The riffs feel like so many you've heard before, splayed out in patterns that don't necessarily heighten or intensify the immense strength behind the instrumentation, and moments of climactic, frightening atmosphere are few and far between, lost amidst the storm of limbs and gutturals. I really liked the intros and intervals used for the album, but the metallic components are little more than the business end of a hastened landfill tractor, unforgiving but systematic, a well-oiled machine performing the same task as others off its same assembly line. From a compositional standpoint, it often felt difficult to discern where one track ended and another began. Marasmus knows its shit very well, and when taken as a 25 minute lozenge of aural manslaughter, this is an effectively relentless debut. Just not one that I'm likely to remember in a few months' time.