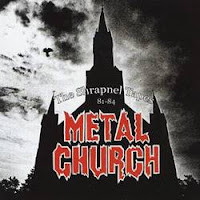 The Shrapnel Tapes 81-84 is a long belated collection of the earliest demo material from Metal Church, who for awhile had gone by the name of 'Shrapnel' (in particular on the instrumental Red Skies demo included here) before switching back. To be frank, this is only going to be of interest or use to the most diehard advocates of the band's earlier years, since it has nothing to do with the stylistic evolution some so loved during the years of Mike Howe or the tidier power/heavy metal transition of the more recent Ronnie Munroe years. If Metal Church and The Dark are your bread and butter, though, and you absolutely must hear the most primal incarnations of several of the songs off the debut, then this is clearly targeted in your direction.

In total, you're getting the Four Hymns demo (1981), which many will value for the presence of David Wayne, the Red Skies demo, and then a few other rehearsal tapes from the 81-84 era, one of which is a medley of tracks from a rehearsal demo at the close of that period. Personally. The first four tracks are probably the strongest here, as you're getting raw and authentic renditions of "Battalions" and "Gods of Wrath" from the debut album, not to mention "The Brave" a stock but dark and forceful mid paced banger that some might recognize from the Metal Massacre V compilation. The production is noisy as fuck on a few of the tunes, but what else could you expect from a 30 year old demo transfer. They probably just could have released this as a disc and fans would have lapped it up, especially for the non-album material, but that's not to say it gets preference to the later studio versions on the s/t.

As for the instrumental tapes, well these are really no more than dirty laundry being aired out for those who think they might wanna perform some sort of garage karaoke. Dirty in this case being a somewhat positive trait, because tunes like "Merciless Onslaught" and "Hitman (aka Thrasher)" don't sound all that bad in this most visceral of forms. It's not as if Metal Church had a bunch of other formal vocal demos kicking around that they could have incorporated, so at least they seemed to try and get this as complete as possible. I do think the primal grooves and heavy, sped up NWOBHM influence to tunes like "Graveyard Lust" or "Put the Chains On" might hold an appeal for fans of Metallica's debut, Kill 'Em All, though riff for riff this band was never even a close match for that one in the 80s.

The '84 rehearsal sounds like a shit pile, with the vocals drifting off somewhere in the distance and the guitar experienced as little more than a sonic slice to the head, and the bonus live take on "The Brave" is likewise lackluster, though at least you can hear David cutting through there and it feels like you're watching the band from a good distance at the club. In the end, though, The Shrapnel Tapes doesn't have much to it unless you're a collector or completist, or you want to hear a few more rarities from a band that has rarely exposed them, including an 'unknown song' which is hardly worth it. It's not a good access point for those new to their sound (skip straight to the first two albums in that case), and I doubt anyone dead set on acquiring it for their collection will even break it out with any frequency. But at least it's not a complete waste.