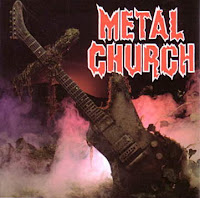 My first encounter with California's Metal Church probably came around a year after their eponymous debut dropped, the band had achieved some visibility even at the dawn of their career and people were talking about them in my junior high and the neighboring high school where all the cool kids we wanted to be were hanging out. This is more than likely due to their proximity to Metallica, both geographically and by the fact that they were to become label mates once Elektra issued this record; not to mention that both groups wore their genre on their sleeve by picking incredibly obvious, cheesy band names. Though I admit, 'Metal Church' has a spiked hardness about it which resonates down through the ages, the moss-laden cruciform guitar image against the foggy backdrop an iconic cover despite the fact it looks like it popped out of some awful 80s horror film.

Another parallel to Metallica was that these guys were a bit difficult to pin down in terms of their exact style, but then they manifest right a time when the 'heavy metal' genre hadn't exactly splintered off into a dozen directions. Thrash was just shedding its baby fat, new artists were testing the waters, and Kurdt Vanderhoof and crew were no exception, exploring a hybrid of thrash, power and traditional NWOBHM not unlike Kill 'Em All, if a fraction less raw and vicious in its execution. The band had already cycled through a number of lineups on its earlier demos, but with the 1982 tape Four Hymns and this debut, they finally arrived at the 'classic' lineup of Duke Erickson on bass, Kirk Arrington on drums, Craig Wells and Vanderhoof slinging the six-strings and, perhaps most importantly, David Wayne on the vocals: the most important roster of the band's career, which saw the best results on their studio work.

Wayne was a particular selling point for me personally, because around this same time I had also been getting into some other little bands called Accept and Savatage, and for me David was a nice combination of Jon Oliva's mid-ranged, dirty rasp and Udo Dirkschneider's AC/DC-like air siren, though never quite so wild as the latter in terms of discharging a chorus. In fact, he's got this amazing control that I totally admired: just slather on some reverb in a tune like "Metal Church" and witness how expertly the guy howls off into the night. This is a time when metal riffing was so iconic, daring and for the large part inventive that a front man really had to possess a distinct personality to stand out against it, and I feel that with Metal Church, Wayne assured us he was every bit the genre paragon that an Araya or Hetfield would prove.

All around, I really enjoyed the production and the dark attitude persisting through the debut, even though it hasn't stood up to me as my favorite in their canon (that spot belongs to its successor, The Dark), and I rarely revisit as much as other classics of the period. The guitars are intense, busy and mightily structured, the ominous power/thrash riffing of songs like "Beyond the Black", "Battalions" and "Merciless Onslaught" sure to sate fans of other US acts of the mid-80s like Helstar, Omen and Vicious Rumors. There are a few more traditional pieces with simpler guitars in an early Priest/Maiden vein like "Gods of Wrath" or "In the Blood" that felt a fraction dated even by this time, and some straight speed metal like "Hitman" which one could compare to Canadians Exciter on their earlier efforts, but I tend to fancy the more atmospheric, 'epic' tunes on the album like the first two, including "Metal Church" anthem itself with the speedy bass lines and muted picking in the verse.

As an 80s record, you know what to expect in the mix: loud vocals engineered to stand on the shoulders of the instruments, but Metal Church was actually more even than most, with a great organic drum tone and a bold balance of the guitars that sounds crisp and clear even compared to modern studio works. Erickson is a strong factor in songs like "Metal Church" or "(My Favorite) Nightmare", though he doesn't stand out all that much elsewhere. The leads are appreciably frenetic and as a rhythm team, Wells and Vanderhoof provided a damned solid exchange, though every time Wayne opens that throat for some godlike howl the attention is immediately refocused elsewhere. Lyrics of war, murder and apocalypse ensured that the album would be taken seriously despite its 'looks', and the cover of Deep Purple's "Highway Star" was a decent touch molded well to the band's grimier execution: in 1984, it hadn't quite been played out to death yet.

Still, Metal Church often feels mildly uneven, with a few of the songs clearly grandfathered in from where the band were pursuing a more British, hard rocking course. There's a sense of timelessness to the recording, like many albums of the decade, but it doesn't have those insanely memorable chorus sections or constant riffs to blow your wad over. The sophomore had cuts like "Ton of Bricks", "Start the Fire" and "The Dark" which probably wouldn't evade my brain if I were lobotomized, but here the money shots seem a little low on spunk. Compare this to Powerslave, Don't Break the Oath, Defenders of the Faith or Ride the Lightning and there was a clear gulf in quality, so I had a notion that Metal Church were second stringers right from the startling line, though this and the followup are well worth owning, the crown jewels of this iron parish.