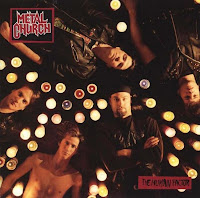 All but forgotten by now, and deservedly so, The Human Factor was an album to continue the decline of Metal Church into the 90s, both in quality and relevance. This is the second of the Mike Howe fronted records, and would prove their last on a major label (this time Epic), for pretty obvious reasons. It attempts to dial back the band's heavy backbone to emphasize hard rock influences and further accessibility at an age when much of metal was on the verge of being thrown to the preeminent cultural wolves, and comes up very short in songwriting endurance. The thrown together, uninteresting rhythm guitar riffs, the dull everyman lyrics (often vomiting cliches at key moments in the vocal lines), the inspiration leeching safety of the dry production: this is about as pedestrian as it got for the Californians, and while in some cases that could be regarded as a compliment for some well executed, blue collar heavy metal, this is not one of them. Let us lie among the candles, friends, as we hold a vigil for what might have been.

About the only positive I can really say for The Human Factor is that it's got a festive energy to it that sounds not so much like a band losing its steam as one desperate to remain afloat. Howe's cutting timbre seems to have less of an array of effects in the mix, and all around they seemed to be steering themselves towards a more natural tone. There are a lot of  hard rock and roll fueled grooves carved into the sturdier, metallic riffing, which makes its seem like they were a little late jumping on the gravy train of bands like Skid Row, Extreme and so forth, or perhaps more accurately the British band Wolfsbane. You hear this a lot with the opening riffs of "In Mourning", or the mediocre power ballad fake outs like "Agent Green" with its punctuated verse rhythm. I realize that the membrane between the two styles has always been pretty slim, but fuck, I wouldn't care if Metal Church put out an album like Aerosmith, as long as the songs were good. For the most part it's more of the same Blessing in Disguise selection of played out chord progressions, only wimpy and unmemorable, as if they were attempting to stymy their diminishing pertinence with a friendly grab towards the far broader and stubborner hard rock crowd.

This is, of course, very much a product of its times, as you can tell in the anti-sampling lyrics to the titular opener, which seems to have some beef against electronic/pop music or sampling, because that somehow takes the 'humanness' out of music. Eye rolls. But more than that, it's the same sad story that affected so many great bands in the 90s, struggling to carve out a niche in a market that was turning to Pearl Jam. At its heaviest, the more thrash-heavy riffs are about as interesting as those on the underwhelming Anthrax or Overkill records of that decade, and the post-Zeppelin/Cream boogie blues patterns all seem to saunter along a too trodden ground. There are some decent leads scattered through the record, and it does actually seem to pace itself out evenly with some rhythmic variation and emotional contrasts, but that's the best I can say for an album whose choruses are so meek and unmemorable that I can't remember them after stirring my tea for five minutes in the kitchen. Guess I'm just not 'human' enough to appreciate it, but Breaking Point or The Dark this is not.