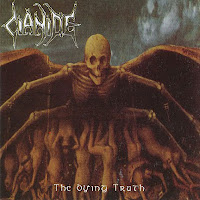 Though they've never seemed to accrue the same level of cult respect and admiration as other death/doom luminaries like Asphyx or Autopsy, the Chicago mobsters Cianide nonetheless earned their spot in extreme metal history for the thuggish, abusive atrocities they have committed. Mindless of the shifting landscape of death around them into the 90s, when progression took the shape of increasing complexity and percussive brutality, the band continue to churn out some of the most minimal, laconic and low end dirt in the medium. Minor alterations in production across their catalog, or slight surges in riffing technique, did little to veil the fact that Cianide DEFINES old school in all its actions, and doesn't give a whit about the repercussions.

Granted, I've never been the biggest follower of the group, but their 1992 debut The Dying Truth is probably that which I remembered most, ever since happening upon the cassette in the city, on one of many second hand scavenges I took to take advantage of the compact disc usurper so in vogue. Who could forget the sick cover artwork, a skeletal arbiter of oblivion absorbing the stripped and damned dead into its wings and limbs? Well, thanks to Deathgasm records, the album is returning to us in its most comprehensive form yet, a CD release that features both of the band's early demos (Funeral 1990 and Second Life 1991) as bonus content, and a track order rearranged to the band's original wishes. Sort of like a 'directors cut', the cut being a meat cleaver across the fleshy pulp of your throat.

Cianide's sound consists of little more than the most base of ingredients for the genre. A copious, swollen guitar tone is molded into chugging, slow to mid gait passages which crunch along below the surprisingly polished mix of the drums, while they also breach a few of those down-tuned grooves that were so huge on the Bolt Thrower records of the late 80s. Through the years I've also been found some parallels between this album and the first few Obituary records; they have that same knack for the stripped weight and authenticity of the riffs building atmosphere all to themselves. Also, in that those pure doom grooves that permeate the zombie marches present in tunes like "Mindscrape" and "Funeral" trace their lineage back to Hellhammer, a course the Floridians also pursued.

The primary difference is that Mike Perun's vocals don't have that same necrotic scrawl to them as Tardy, this is more of a straight blunt guttural in the vein of Karl Willetts or Chris Reifert's lower pitch, and the result is often one of relative monotony, since so many of the intonations feel similar in delivery. Don't mistake me here, the vocals are 100% suited to the drudging certainty of the songs, but what I've always found lacking on The Dying Truth was a strong sense of variation. Dynamically speaking, there are different tempos here, but the whole 42 minutes and eight tracks of the experience often seem rather narrow in scope, and though the crushing force of the guitars is in of itself 'heavy', there is a distinct lack of truly sinister sounding chord progressions throughout the writing.

This is due largely to the net dearth of melody and atmosphere throughout the writing. A few throwaway lead lines exist in tunes like "Mindscrape", but as a whole the momentum seems reliant far too heavily on the rhythm guitar chugging. A few eerie melodies, even just a handful of notes strung out upon the burgeoning chords like a chill mist on a graveyard would have gone a long way to deepening the experience, and maybe a few more points at which the bass lines would break free of the oppressive guitars. But, that being said, The Dying Truth is still quite sure of itself, comfortable enough in its no-gimmick formula to slowly raise and descend its spiked bludgeon over your head like a practiced neanderthal executioner. A successful disc, if not as staggeringly evil or tyrannical sounding as a Mental Funeral, Realm of Chaos or Cause of Death.

The demos are a very sweet bonus, as they let you trace the trio's path to the debut and Grind Core signing. Funeral is the rougher of the pair, the guitars sped up a little and thrashier sounding than on the full-length, but Second Life is pretty close in quality, only a bit fuzzier due to the recording. Granted, there are plenty of redundancies since most of these songs were also on the album, but the band does include an unreleased track called "Morbid Restitution" which had appeared previously only on a rare comp in 2006, and this has more of a tremolo picked, raw death metal feel to it of the Death and Master persuasion. All told, the bonus content adds enough value to make this the de facto version of the record for newer fans to check out.

Cianide might not have had the same impact on me in their heyday as fellow US sickos like Autopsy or Incantation; but especially today, when so many younger groups are stumbling over themselves to live out the nostalgia of a period they missed, cracking the doors of the crypts open to experience the 80s and 90s as fully as possible, I feel as if the Chicago veterans (still keeping busy, by the way) certainly warrant another listen. Make this yours.