Satanic Bloodspraying - At the Mercy of Satan (2012) 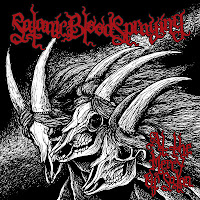 About as far removed from subtlety as one could experience, the Bolivian unknowns Satanic Bloodspraying arrive on the Hells Headbangers roster in full force with a 25 minute dissertation on primal black/thrash punishment which serves no interest beyond living up to the band's moniker. This is rib spreading, heart devouring, ghastly South American sacrifice with almost no emphasis on uniqueness, no deviation towards complexity, and no real artistry beyond the sheer act of butchery being committed to audio. You will love it, or you will hate it. They offer no apologies in the latter case, but if you're the sort that spends much of his or her day threading black, white and red logo patches to whatever empty space remains on your denim and leather outerwear, you will surely sip at its sanguine teat.

The band is being touted as Impaled Nazarene worship, and I can certainly hear where that comparison is coming from, though I'd also cite Nifelheim, Venom and early Bathory as stylistic siblings. The guitars crash along with full on blasts of chords beneath the expressive, blood-curdling rasp of the vocalist, and while the riffs are incredibly simplistic and offer little variety, often subsisting on a mere two chords, there is a similar, infernal freshness redolent of the aforementioned Finn punk-demons. The drums are your standard, straight razors of hostility, blasted along with considerable force, meticulous yet a little predictable in design; while the bass just oozes this copious load of distortion that would still crush the listener's face in even if the guitars were never around to accompany it. They also layer in guttural counter vocals (as in the chorus of "Satanic Skullfuck") and echoed shouts to curb the monotony of the salacious front man, so it's not exactly a one track record.

In fact, the Bolivians would often surprise me, as with the epic, slower paced slaughterfest that is "The Day the Earth Stood Still", where a few deep piano strikes secede to some carnal, rocking guitars that almost ascend to the heights of late 80s, epic Bathory (also prominent in the similar "March the Dead"). Yet, even at these points, they don't really mix up the riffing enough that my ears had something to explore. Granted, the songs are kept to a manageable length (usually 2-3 minutes) and hardly require distractions, but often I felt that there really wasn't enough going on even in such a restricted space. Also, though the riffing style is comparable, the band never felt as drunken, blistering and vicious as Impaled Nazarene on their classic works, so you don't often feel like your face is being splayed along the hellish highway pavement.

There is, as I noted above, an audience that will always gorge itself on this sort of honest, purebred volatility that attempts little more than to recapture the grisly history of its influences and to these fiends, I say that At the Mercy of Satan will not prove a disappointment. However, I didn't personally get a lot out of the album. The lyrical aesthetics, which explore the usual dark occult, necromantic and horror themes all feel like well trodden ground, and the riffs fall well short of purchase on any new territory: violent, and cruel, but never all that ominous or evil in notation. A decent album for breaking glass with a spiked gauntlet, and the production impresses with its blood-spattered boldness, but it's not something I feel pulling me back to it, despite the punch in the face I know I will receive.