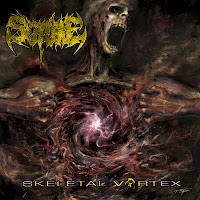 Have to say I found the cover art to this one quite hypnotizing. While it seems little more than some haggard, lich-like being opening some sort of extra-dimensional portal in its own ribcage, the high resolution pic I was sent with the digital promo was quite beautiful, and I couldn't help but stare into it as I was listening. At any rate, Suture are a Louisiana brutal death metal act formed in the late 90s who took a hiatus shortly after this album was released through Unmatched Brutality, but have recently returned. Yes, sophomore Skeletal Vortex might 'officially' be a 2008 release, but this new version has been remixed and mastered, its dense and darkening overtures painted with a fresh coat of agony, and I can only imagine that it has benefited from the treatment.

Once again, I'm faced with a death metal group that does nothing particularly new or different than the many before it, but executes its style extremely well. Though they clearly belong to the 'brutal' niche of the genre, with the obvious influences in Immolation, Suffocation and Florida extremists like Morbid Angel and Malevolent Creation, there is something measured and contemplative about the writing which erupts whenever they break into some more soaring, tremolo melody among the more pummeling currents of the chugged and blasted rhythm guitars and drums; or a choppier, progressive pattern circa 90s Death. The titles alone, like "Escaping the Confines of my Skin", "Exiled to Undead" or "Overseer to the End of Days" would seem to imply a more philosophical bent on the brutality, but the subtle strains of melody coursing beneath the brunt of bludgeoning hint at a band who are perhaps interested in more than just the mere gore of so many fellows. Affix this to the jerking, attention keeping variation found in cuts like "Chaossuary" or the titular "Skeletal Vortex" and you've got yourself a band who can run neck in neck with some of the California crushers of late like Severed Savior, Inherit Disease, etc.

That said, Skeletal Vortex is not exactly perfect. The Deicide/Morbid Angel-like brutal grunts (and occasional layered snarls) are rhythmic and percussively sound, but they hardly distinguish themselves among the myriad others who sound almost exactly the same. A lot of the driving patterns sound like they were torn directly from the Hate Eternal/Morbid Angel playbook without adding much pizzazz, and there are a few low-end chugging patterns throughout that seem forgettable as soon as they've played out. But for an album four years old already, the new production is rich and captivating. The Louisianans know how to lock you into an eerie, extraworldly space and then beat the Jesus out of you, almost as if you were hijacked by Elder Gods who wanted your wheels. This is another 'total package' band, with musicianship, intelligence, ideas and an ability to contrast numerous emotions into the resonance of their writing: from fear to wonder. Looking forward, but skinned in the past. With bands like Suture and Alabama's Chaos Inception writing the albums we WISH Morbid Angel would put out, the South is looking mighty strong in this new era of punishment.