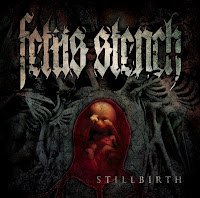 Ah, the fetus. That unborn paragon of innocence so soiled and exploited by the death metal community, once again taken to task, this time for its very olfactory qualities. I can't imagine the things smell great, nor would I ever wish to find out, but this new Swedish outfit has wrapped itself in the notion and exhaled its first full-length from the womb of brutality with a decidedly non-Swedish spin on the composition; always a welcome trait in a world saturated with soundalikes of Entombed, Dismember and At the Gates. No, Fetus Stench clutch the reins of US aggression handed them by Morbid Angel, Cannibal Corpse and Suffocation and ride forth into a sunset of slaughtered infants.

Stillbirth is that sort of album which straddles both a nostalgic territory and a more youthful impulse. You're not getting anything new or nuanced out of the songwriting, but the means by which they hone their 90s influences into a formidable, brickhouse slugfest loaded to the fists with tempo and riffing variation will nonetheless have you twisting your neck out of its socket. Skin basher Emil (also serving time as the most recent drummer in Blood Red Throne) is a veritable whirlwind of blasting and double bass sequences which keep the momentum up to snuff with the more contemporary, technical acts in the field, but most of the actual guitar progressions alternate between early tremolo grinding, choppy death/thrash breakdowns and palm muted recoil circa Cannibal Corpse, Malevolent Creation, etc. Nothing exceedingly complicated in terms of the raw rhythmic patterns, but an appreciable percussive mesh to levy the blunt vocals, which recall the Morbid Angel/Hate Eternal camp lent the subtext of a more visceral snarl.

Frankly, as studied and busy as Stillbirth keeps itself, there are not a lot of individual tracks that stand out through the playlist. Taken in as a whole, it's a fully competent execution with well placed leads, zero cases of lazy monotony thanks to their constant sense of transition, but there were only a few tunes like the ballistic "Brennkommando" or the surprisingly groovy "Severe Suffering" (my favorite here) with the sticky riffing that constantly made me want to hit the repeat button. The production here is so straightforward and clean that I can't say it lent much character or distinction to the album, exchanging the darkened possibility of a dirtier guitar tone for something bludgeoning and sterile. This is not so much an 'evil' record as one that bullies you upside the face repeatedly. Most of the lyrics and titles ("Bashed, Defaced, and Disfigured" for example) feel as if they'd just been reworded from familiar sources, but then again, novelty is not a characteristic bands like this specifically seek.

Fetus Stench possess all the weaponry required in the death metal of today, with their feet firmly planted in the fundamentals. They pull off a taut and muscular debut here, but it wouldn't kill them to apply more atmospherics and striking riffs into the gestalt of their arsenal.