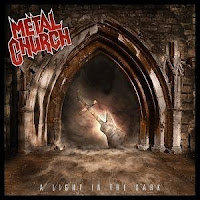 A Light in the Dark was a fairly curious Metal Church album, if only because the band once again seemed to experience another of many shifts in tone, this time to a darker and dirtier style than I might have expected after The Weight of the World. This comes in both the vocals and riffing delivery, which seem to attempt to bridge back towards the more vicious edge experienced through the first two records in the 80s, meeting limited success. By this point, Vanderhoof was the only original member left in the group, long-time drummer Kirk Arrington having left the lineup; but this replacement, Jeff Plate had quite a repertoire including Savatage, Trans-Siberian Orchestra and associated acts, so the kit was at least left in good hands. One can help but wonder though, if this album was spurred on by a bit of Kurdt's nostalgia for the band's mid-80s boom. The crucifix guitar from the debut and Masterpeace had returned. The cover features a similar, gaping 'opening' as did The Dark, and then, of course, there's the title itself, which seems self-referential. Additionally, there is a 20 year anniversary remake of "Watch the Children Pray", devoted to the late David Wayne, a nice touch, rendering the internal conflicts the band had suffered blood under the bridge.

At any rate, this is hardly the group's crowning achievement, but another passable record which tries honestly damned hard to mete out the more brooding atmosphere of The Dark. Munroe has a lot more grit this time out, channeling the spirit of Wayne's lower register muddied in spots with a bit of Chris Boltendahl meatier bite circa Grave Digger. There are a few growls. Some manic laughter. When he ups the pitch, he sounds a little closer to himself on the previous record, but you could have told me this was another guy entirely and I might damn well have believed you. Matched up with the busier, edgier, grooving power/thrash riffs in tunes like the titular "Light in the Dark" or "Pill for the Kill", speed metal burst of "Mirror of Lies", it's probably the most aggressive the band had sounded since at least Blessing in Disguise. That said, they also don't shun the epic, melodic mood that had been present on The Weight of the World: tracks like the 10 minute "Temple of the Sea", or "Disappear" and "Beyond All Reason" which temper the rugged momentum with some shots of cleaner guitars and a dash of prog rock arrangement. Most of the riff progressions are well composed, just never quite exemplary. You'll always feel as if you've heard them before, but their varied and competent. The group knows damn well how to put a song together, just not one that squats in the memory banks for any period of time.

Lyrically, this was a fraction stronger than The Weight of the World, and I'm happy to say that all of the Munroe fronted records trump the Howe years in this regard, a mix of angry and introspective musings that are no doubt meant to appeal to the audience which has aged alongside the band. The main issue, with this album and so many others like it, as that we're looking at the year two thousand fucking six, and bands with long legacies seemed to want to rest too much on their laurels, while not writing at the level of inspiration that got them there in the first place. I feel it everywhere, on all levels, including huge names like Judas Priest and Iron Maiden (who have never had to struggle to put bread on their tables since the 90s, yet have written worse albums than this one in the 21st century). Sounding like yourselves and putting your logo on the cover is just not enough anymore, and I think A Light in the Dark is another victim of this trend. Not a bad album by any means, but its punchy production values and all around solid execution fall short of the volatile inspiration of The Dark. I found none of the choruses all that resonant, and though the front man is not lost to the concept of charisma, the songs supporting his delivery seem decisively average. I'd have to place it between Masterpeace and The Weight of the World in terms of quality.