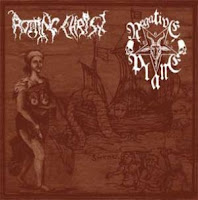 On its surface, this collaboration is yet another of those unique ideas one cannot help but admire. Essentially the 7" split provides the 'soundtrack' to a doctoral publication coming out later in the year through a Swedish imprint known as Malört Förlag, and was arranged by the historian Mikael Häll, who also provides a narrative intro to the two songs and appears on the Rotting Christ track (he also appeared on the 2006 debut by the band Sleeping Majesty). The theme of his dissertation is in antiquated sexual commerce with supernatural beings, but beyond that, let's just come out and say it: the man has great taste, and picked two of the finest bands in the black metal niche to help represent his research.

Of course, Rotting Christ and Negative Plane have two highly distinct sounds that heavily contrast with one another, and I'm not sure they match up aesthetically for this release. About the only thing that connects the two tunes is the deep, sonorous narrative introducing them. The Greeks' contribution, "Naturdemonernas Lockrop: I 1000 Djävlars Namn" is a riff heavy construction, not entirely unlike the material from their past half dozen full-lengths, which features thrash-driven guitars wrought with chants and the sort of triumphant climax chorus you'd have heard on albums like A Dead Poem, Khronos or even Sleep of the Angels. Energetic, certainly, with a particularly bloody execution of Sakis' rasping, but not their most memorable piece in recent years. Contrast this with the non-metallic Negative Plane instrumental, which is founded on eerie, clean guitars and swerving, psychedelic bass lines set to a tinny percussion backdrop, and you get a broad gulf in style.

Of the two, I found the latter marginally more compelling, but only because it leaves so much to the imagination. Effort-wise, I'd not be surprised of the trio could knock out a dozen "Chasm Depths" in an afternoon/evening rehearsal session. So as far as its musical value, I wouldn't think to hold the split in the highest regard. That being said, though, I feel like this sort of collaboration deserves encouragement, not only for the eclectic and rich quality of the artists involved, but also as an outlet for intellectual pursuits that bridge history, literature and extreme music. That Rotting Christ and Negative Plane agreed to do this does not particularly shock me: these are phenomenal bands who have long held an interest in writing music that dives far beneath the epidermis of their chosen genre. Häll's subject matter is fascinating (though I'm not sure English readers will get a translated version when the writings are published), and the idea of such a multimedia exhibition as this is cool beyond words (they've released numerous author audio-literary crossovers before); but, unfortunately, neither of the individual songs here is the best representation of its artist, and so it's ultimately more of a novelty than a necessity.