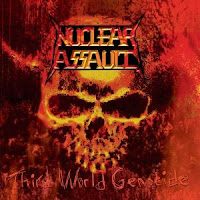 It says a lot to me that, even at its very best, Third World Genocide is capable of evoking little more than nostalgia for other songs that came before it, and not only those of the Nuclear Assault canon, but others from the 80s. For instance, "Price of Freedom" has a chorus bit that sounds eerily reminiscent of Lääz Rockit's "Leatherface". It says even more, that even with bassist Dan Lilker back in the fold, dragging Brutal Truth guitarist Erik Burke along to fill the vacant guitar chair of Anthony Bramante (who appears only on "Glenn's Song" at the end), these guys managed to whip up one of the hands down worst 'comeback' albums of the 21st century to date, not because it's totally out of character or style as an attempt to return towards the group's 80s hardcore/punk-laced aesthetics, but because the songwriting flat out sucks. The riffs on this thing might not have even been good enough as demo fare before the guys got a record deal. It's nearly 100% cutting room floor pap that makes me frustrated to just think of it, uninspired to the point that it would even make me pine for their less than ideal 90s records Out of Order and Something Wicked...

When the band aren't fucking off with a TERRIBLE punk joke song like "Whine and Cheese", a requisite, brief grinder like "The Hockey Song", or covering a countrified John Connelly Theory tune (why?) in "Long Haired Asshole", none of which are even remotely funny, they are meting out the most generic riffing patterns in their whole history. These guys must not have spent more than five minutes writing a single track here. 'Guys, does this riff sound like thrash?' 'Uh...I think so?' 'Okay, rolling tape.' The lyric patterns seem like afterthoughts squeezed onto trifle guitar progressions that evoke absolutely none of the pavement cracking filth of the past. Tunes like "Third World Genocide" and "Exoskeletal" are little more than dime a dozen whiff thrash, which at best offer you a burning lead. Occasionally there will be a busier pattern, like in "Human Wreckage" where the group guns for something more involved and ambitious, but even these come up dry due to the stale sounding production permeating the entire effort. The reformed New Yorkers had moved over to the Screaming Ferret Wreckords roster (a local New England label from New Hampshire), so one could not have expected high budget wizardry, but this still comes up shy of any prior full-length.

Lilker is perhaps the only consistent positive on this album, but he had little to work with. Still, his buzzing and thumping bass lines seem as driven as we remember them, and to be fair the lead sequences are often pretty explosive too. The saddest fact is that, aesthetically, Third World Genocide is quite close to the first pair of albums in terms of the riff structures. Gone are the more accessible overtures of Something Wicked. This is pure regression, but it forgets to drag with it those songwriting chops that put the band on the map to begin with. This is not The Antichrist, with a veteran squad (like Destruction) finding such renewed vigor and purpose that it manages to trump itself. Rather, it's about the same level of quality one might expect of a random, drunken rehearsal session in 1987 when the band hit record on their tape deck and decided to spontaneously create songs, then scrap them the next morning for a lack of hooks. The material on this album is structured, with clearly defined verses, choruses, and tempo change ups, but its wholly unimpressive, even at its 'high point': "Glenns Song", with the "Critical Mass" like bass rhythm, dull chugging bounce riffs, weak as shit, barely audible verse vocals that somehow transition into one or two screaming moments of actual value. Conveniently tucked away at the end...

Hell, even the lyrics seem uninspired. One might think these guys would drop some wisdom on us after all their time in the industry, but it's the usual thrash anthems against racism and dictatorship that the band, and many others like them, had already trampled in the past. Not that I'd mind these subjects if they were gifted with a decent chorus sequence that made my fists fly as in the old days, but such is nowhere to be found on Third World Genocide, a complete dud which even makes the worst output of fellow East Coasters like Anthrax and Overkill in the 90s/00s shine by comparison. Now, if you'll excuse me, I'd like to go back to pretending this doesn't exist.