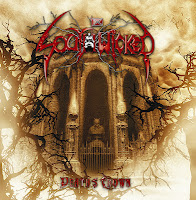 I probably won't be the only person that looks upon the cover of Death's Crown and thinks to himself: 'Confederate death metal? Yesss!' Alas, I felt a bit of disappointment that this was not entirely the case for the debut of Southwicked, a Tampa area band featuring former Obituary and Six Feet Under guitarist Allen West, and a surprising number of Belgians. On the other hand, this is about as close to the 'classic' Obituary sound circa Cause of Death and The End Complete that you're going to get, so those pining for the primordial aggression of those promising years will find themselves in very familiar terrain. Whether this is a good thing or not really depends on just how much you want to hear more of the same, because there are very few embellishments on the style here, just an honest, well rounded session of skull crushing grooves performed by one of the niche's very own forefathers.

I was expecting this album to open with the thunder of Civil War cannons and the screams of dying and fighting men, but instead was caught off-guard when the band pulled out a sample from the schlock 80s horror film Shocker, before launching into a loud, lumbering sequence of open drudge chords and groovy bass hooks with a bluesy lead on top. Before long, though, we're in total flashback mode, the rhythm guitars chopping along in patterns which feel like mere variations on riffs West performed decades ago. The major difference, though, between Southwicked and either of West's aforementioned alma maters is vocalist Sven Poets, who has this deep and ominous guttural drawl redolent of bands like Incantation. Far closer to Chris Barnes than it is John Tardy, he really lets his intonation resonate through the mix and adds this brooding sensation over the music that gives it breadth and dimension, which helps the rather average slew of riffing progressions sink a little easier to the palette.

Otherwise, the production on this thing is quite a good fit for the churning of numbers like "Graveyard of Bones", "Craving for Blood" and so forth. The guitar tone is eerily reminiscent of Allen's older albums, but I enjoyed the fluid and fairly live feel to the drums. The polish on the bottom feeding bass-lines which throb under the chugging monoliths. As for the writing, it's decent enough to sweep you up into nostalgia for those years you first heard Slowly We Rot or Undead, but I had hoped for a more distinct conceptual character. The riffs are heavy, but never exactly evil. More of the band's bluesier excursions would have worked wonders here, or perhaps some folksy rock guitars to give it a more 'Southern' feel, as some might have experienced on that Tardy Brothers side project. Instead, most of the atmosphere is created solely through Poets' timbre and the weight of the guitars, which just aren't that fresh or impressive. Ultimately, there is nothing necessarily 'bad' about Death's Crown. It is what it is, but perhaps the customary Obituary bits hold it back from evoking its own identity.