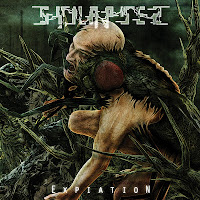 Italians Synapses have such a methodic, inhuman approach to their groove laden brutality that you might have lied to me that their debut Expiation was written by robots and I'd have feared for my safety. So precise and punctual are the double bass passages, percussive muted strings and the bludgeoning gutturals of Giovanni Canedoli that almost all sense of organic composition is eschewed; and yet the warm, almost jazz-like flood of bass and the band's flippant, manic bursts of elevated notes up and down the frets hint at a fleshier pulp alongside its more cybernetic aesthetics. Took me a few spins to really appreciate what these relative newcomers were bringing to the table, and I can't say that I enjoyed all its exhausting head beatings, but I have a feeling many necks will strain and ultimately break to this record's punishing whims.

When I say 'groove', these bastards take it to a whole other level, not necessarily with a 'djent' sort of chugging tone, but my pairing up the concussive guitars with a ton of straight double bass that lends itself well to the imminent fits of rhythmic convulsion that race off across the fret boards. Tunes like "The Iron Stream" and "The Rapture of Terror" are great examples of how the band uses this systematic hybrid of technical thrash and death discord over the popping and harried bass lines. Compared to the music beneath then, the vocals can often come across as rather one-note, I hear a bit of the usual brutal USDM timbre with perhaps a dash of Dutch influence circa Pestilence/Asphyx, and an added, ghastly sheen of rasps that help break up the threats of monotony. Actually, modern Pestilence is not a bad comparison for some of the choppy guitar riffs, or maybe some Cynic, Atheist, or Obscura-era Gorguts in there, but many listeners will likely draw references all over the spectrum.

The only major gripe I had with Expiation, outside the relative blandness of the vocals, was that the musicians seem so cognizant of jazz and progressive metal that I almost wished they would have taken more detours into period of 'calm' to create a greater contrast against all the aggression. As it stands, this album can be a headache in waiting, and I found it difficult to listen to more than 3-4 tunes in succession without needing a break. It's not because Synapses lack some variation: within this constant, hammering context of the songwriting they do attempt all manner of licks on the guitars to help distinguish the tracks, but I've love to hear what the Italians could come up with if they cast the net a little broader. Expiation should still turn a few heads, and snap the vertebrae supporting them, but ultimately the sheer burden of its rhythmic assertions was a wee bit tiring, and its pugilistic path a just a fraction too narrow. If you're seeking out acrobatic tech/death sans the 'core influences, this is one to watch out for, because there is talent aplenty to develop.