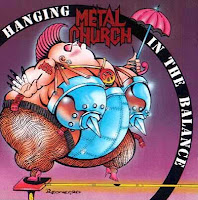 When I first decided to cover Metal Church earlier in the year, Hanging in the Balance was one of their albums I was most looking forward to revisiting. Originally released to the sounds of crickets in 1993, it was the final full length to involve ex-Heretic howler Mike Howe, received some flak for its poor choice in cover art, and seemed to take the formula of The Human Factor and reverse it in time, drawing more deeply from a lot of 70s influences like Judas Priest, Thin Lizzy, Deep Purple and so forth. This was on yet another record label, which hints at a lack of stability, and the sales were quite miserable. Ultimately, the lack of interest in Hanging in the Balance and Metal Church in general led to the group's disintegration (until 1998).

However, through the ensuing years, this record has built up quite a cult following. Several acquaintances (both on and offline) have praised it as an underrated masterwork, the band's magnum opus. I'm going to come right out and say it: I do not share this same enthusiasm for Hanging in the Balance, nor for really any of the Mike Howe fronted releases in the band's catalog. Nothing to do with the cover, as I've got no personal hangups with Rubenesque viking punk tightrope walker broads with spiked bosom and fishnet stockings. The more the merrier. For me it's just that a large portion of the music on this disc is ultimately so forgettable, whereas a few gems tucked away near the latter half of the album seem too little and too late. I'll grant that it's a better album than The Human Factor, with stronger songwriting, superior chorus sequences and the ability to stir up some effective nostalgia for the roots of metal. Where the prior album leaves a black hole in the memory, this one at least conjures a handful of imaginative sparks.

I've always likened the Californians' retrograde evolution to that of their peers Metallica, who also underwent a process of minimalism and 'mainstreaming' around the same time. But where that band's overt simplification (from an admittedly more complex foundation) produced hit single after hit single, broke sales records and transformed an already hot act into an international institution, Hanging in the Balance was the final nail in a coffin of frustration whose framework had been laid as soon as Blessing in Disguise failed to do gangbusters. There was no lack of ambition here. The band was churning out an hour of content with a great deal of variation, they had involved a number of producers and engineers including Paul O'Neill whose work with Savatage was critical to their own development, and there is clear and present direction for it all to take: an accessible mesh of hard rock and heavy metal with big hooks, climactic choruses, loads of clean/acoustic guitars, and the same sense of personal, easy-to-relate-to lyrics from the previous Howe albums.

The production is admittedly well balanced and preserved. Clean yet pulverizing bass tones roll out the the thunder of "Gods of Second Chance", while John Marshall and Craig Wells create some atmosphere on their guitars leading up to the chunky, equalized rhythm riffs. Howe seems to focus a lot on his lower register here, and throughout much of the album, presumably to create an even bolder contrast when he explodes into the higher pitched melodies, but I found that I didn't enjoy it. For a number of the songs, he sounds just like any other run down hard rock front man with a rasp and grit that might just as well have come from excess boozing and cigarette inhalation, a corner bar blues singer stepping up to bat for something a bit heavier. Far cooler are his screams, which he proves are just as capable as Breaking Point or Blessing in Disguise on tunes like "Waiting for a Savior", or even as wild as Bobby Blitz Ellsworth (Overkill) during the verses for "Conductor".

Unfortunately, what I found the least impressive throughout the album were the riffing selections. Not that I expected the band to come out gunning with more technical or 'heavy' hooks than the albums leading up to this, but I feel like you'll get perhaps one or two decent guitar progressions per song, and then everything else just feels like 'stock footage'. In truth, though, just about all the individual riffs here are painfully average, flirting between the stylistic poles of thrash and traditional metal with about as much aggression as you'd find on an album like Armored Saint's Symbol of Salvation, only with less of a knifing zeal to them. They function as a concrete foundation for the vocal lines, but if I were to dissect them, there are simply none that I ever felt like immediately revisiting or trying to work out on my own guitar (a trait that almost all my favorite metal albums of the 70s and 80s shared). The leads are likewise mundane: bluesy and appropriate for the mood of the lyrics and music, but none that I found emotionally resonant.

The first half of the record (first six songs) is basically a wasteland of 'well, that was okay', but I will admit that there are about 3-4 later on that I feel would have made a killer EP. "Little Boy" definitely brings on that pure nostalgia for the drama so inherent to 70s metal and rock. Brooding, atmospheric vocals, clean guitars capitulating to lightning grooves, and perhaps the best single 'thrash' riff on all the album in the power verses. Not to mention that it's 8+ minute length is wholly consistent with its internal narrative. "Down to the River" reminds me a little of a simpler alternative to one of the sequences in Pantera's "Shattered", but then you've got another strong track in "End of the Age", perhaps the most experimental on the disc with a load of folk and prog rock influences: one for the hippies. I also enjoyed the acoustic guitar interlude "Lovers and Madmen" which is dark and fulfilling, and the closer "A Subtle War" for those carving dual melodies that almost remind me of some of Master of Puppet's most eloquent moments if they were captured in a crossfire between Sad Wings of Destiny and Machine Head.

As for being some unsung masterpiece, though, I just do not hear it anywhere. At its best, Hanging in the Balance provides this classy throwback to better bands and albums, but there is just so much content here to which I could only feign interest, enthusiastically skipping over to listen to something else. It's not the band's stripped down stylistic pursuit that turns me off. Hell, I enjoy a few of the tunes on Metallica's Black Album, and I love Trouble's Manic Frustration. But when I turn back the clock and sit through a song like "The Dark", "Metal Church" or "Start the Fire" I feel this inner beast inspiring me to flip over cop cars, hurl Molotov cocktails at my neighbors and bang my fucking head until my eyes burst. Hanging in the Balance is more like background noise for sipping a cool beer on your front porch with that uncle you haven't seen in a few years. It's dynamic, seasoned, mature, and...safe, but it just doesn't have the staying power or the hooks to chase that wider dream.