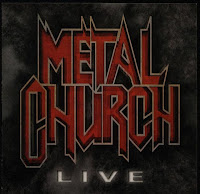 As a teaser for their forthcoming reunion record with David Wayne, Metal Church and Steamhammer dug into the archives to produce one of two live efforts in 1998 (the other was a Japanese release that I've never heard). Live was drawn from recordings of the band's 1986 tour for The Dark, therefor containing all of the band's best songs, at least for one such as myself who didn't get much mileage out of the three Mike Howe fronted albums. So, naturally, I was quite thrilled to listen through it, and damn do they not disappoint, not only because of the actual track selection, but for the production and quality of the performance. The thing might look bland on the surface, but it sounds fantastic.

You're getting 10 tracks, evenly distributed between the first two records, from the classic lineup. The guitar tone is both consistent and aggressive, you might occasionally hear the slight imperfections inherent to any comparison with the respective studio material, but Wells and Vanderhoof sound they like they practiced the shit out of these tunes, consummate professionals who even deliver the leads with skill. The rhythm section also delivers, especially Erickson's bass which sounds good and loud throbbing beneath the riffs. But, as you might expect, David Wayne steals the show away, his voice just as sinister and vitriol dripping as the studio works, especially where he's escalating his melodies like in "Start the Fire" or "Metal Church". Speaking of which, just about all my favorite Metal Church tracks are present in the set list, including those I already named, "Ton of Bricks", "The Dark", and "Beyond the Black".

About the only track I might have left off would be the "Highway Star" cover, but only in favor of another original, not because they make a poor showing of it. That said, I feel like the 46 minutes of the disc is just about right for a band so early on in their career. Not sure why they didn't put this out during their 80s phase, as it might have proven the band's worth and helped draw larger crowds to their gigs, but the very fact that they dropped it as a forerunner to Masterpeace revealed the band's enthusiasm to have Wayne back in the wings, a feeling I happen to share, though the results of the reunion were mixed at best. At any rate, this is well worth hunting down for any fan of the group's 80 phase, since the performances are near flawless.