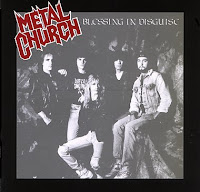 Guilty confession: once I heard, much to my dismay, that Mike Howe was leaving Heretic to unite with Metal Church, I was privately crossing my fingers that this album would possess a lot more of the former than the latter. It seemed like a perfect fit stylistically, since his prior band was playing in a similar power/thrash mold, but Breaking Point was an album I enjoyed (and still enjoy) more than either the Metal Church s/t or its successor The Dark, and I had been clamoring for more. Also, it was a bit stressful that Wayne would break away from the group so early on, with just two albums and no real breakthrough smash. Despite a decent label push for this album, amidst the promotion of other Elektra successes like ...and Justice for All and (to a lesser extent) No Place for Disgrace, it didn't seem to break out of the qualifying rounds to pursue a playoff spot.

Amusingly, the album does sound more like Heretic 2.0 than a natural followup to The Dark, primarily because of Howe's distinct tone but also because the riffs have that same, forceful impact and character. Mike was not the only new member this time out, the band had recruited Metallica roadie and guitar tech John Marshall to replace Vanderhoof; though Kurt still contributed to the recording and behind the scenes for the next several years, he just wasn't a part of their touring roster. Blessing in Disguise was obviously honing in on a more accessible appear for a broader market, as they were teetering on tangible success with the first two and wanted to keep the bills paid and dinner on the table forevermore, but to its credit, this is still a pretty hard hitting disc, just not 'ton of bricks' hard.

Nope, no "Start the Fire" anywhere to be found on this album. It seems that with the ushering in of Howe, the band lost a lot of that dark and cruel undercurrent which made the first two memorable. Not because the guy is a technically inferior singer to Wayne, because on Breaking Point he proved he was had this serrated edge to his timbre that transformed each melody into a carving knife. His higher pitched wolf shrieks on tunes like "Rest in Peace (April 12, 1912)" are excellent, and like Wayne, he's got this instantly distinguished character that can place him apart from just about any other singer in the entire medium. I don't know if it's just the delivery of these particular lyrics, or the lack of compelling riffs to support him, but I was really looking forward to what he did next, and slightly let down here; especially in a year so rife with excellence in thrash, speed and power metal.

The guitars are still rather full-bodied, even more so than the first two efforts, but I felt like there was a more processed tone to them which added punch but detracted charisma. A lot of stock power/thrash notation which, while functional, is never inherently catchy of its own accord. There are a handful of stronger songs on the album, like the opener "Fake Healer" which sets a monolithic mood in its mid-paced momentum, big chords laced with winding melodies and solid dynamics, anchored by muscular drumming. "Unsound Mind" is also pretty sweet, with nice counterpoint vocals panning off in each ear during the chorus and an almost tech thrash bent to it that would appeal to fans of groups like Heathen and Mordred. Yet, others feels pretty dry, like the power ballad "Anthem" or the single/video "Badlands", both of which make a great use of Howe's range, but fail to come up with any hooks to die for, and for some reason the lyrics are very bland and personal, lots of 'self help' style shit that wasn't nearly as cool as those on the earlier records.

Ultimately, Blessing in Disguise is a solid continuation of the sound Heretic was seeking on its full-length, and probably my favorite Church album with Howe present. It's decent, varied and competent enough to offer some entertainment, but there's not a single song which beseeches me down through the years to show it off to folks not in the know. The whole thing seems too heavily produced, too 'safe' lyrically and even the picture of the band members on the cover is mundane and indistinct. This was their last for Elektra, but though they were successful enough to play the major label game for one more outing, it's no wonder to me why the band didn't explode like their fellow acts Metallica, Megadeth, Testament, and Slayer: they did not have the chops, and despite its relative strength, Blessing was just the opening shot in an ensuing bullet storm of banality.