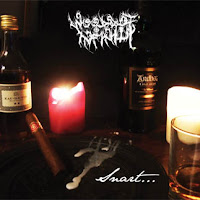 Woods of Infinity have long been one of the most 'whimsical' of Sweden's underground black metal vermin. I don't say that because their records are an endless gag reel of irony or bad humor, but due to the particular delight they seem to take in torturing their audience. This is due largely to the use of such unscrupulous, charismatic vocals which run the gamut from your traditional Scandinavian rasp to the more suicidal, post-Burzum inflection used by a lot of the DSBM artists, to soothing clean tones with an almost folk spin, to sequences in which you almost feel as if you're experiencing some existential debate by a pack of gibbering graveyard ghouls on how best to prepare your flesh for consumption. To kill you would just not be enough for this band, they wish to entertain you in the lifetaking.

I was rather smitten with a few of the group's albums in the past, like the cold and terrifying Ljuset (2005), but their sound has since evolved quite a lot, as with their most recent full-length, Förlåt, which was the audio equivalent of a mass asylum exodus, or a more manic and complex alternative to groups like Lifelover. The Snart... EP is somewhat of a posthumous affair, for as the band felt that they grew apart from their roots, they decided to disband (without ruling out the chance that they might reunite or work together elsewhere). Really, this is a loss to us all, because even if they weren't the utmost harbingers of quality, they managed to retain a fascinating, wrist-cutting undertow through their canon, a distinct personality along the razor's edge. Snart..., while clocking in at only two tracks and about 10 minutes of material, seems a rather mournful soliloquy, a reflection on the band's tortured obscurity, but most of the hallmarks are in place: guitars heavily saturated in slicing distortion, overpowering resonant vocals, streaming melodies, drums programmed just at the edge of perception so they carry rhythm without becoming a distraction, and funereal pianos and keys.

Or rather, those traits define the first track on this release, "Mot Usqubaugh", because the second piece is more of a sweeping, Gothic metal overture written by Swedish personality Claes af Geijerstam. Here you get a more pronounced use of the pianos and incredibly dramatic vocals that are in English, overall an amusing contrast to the fare more repulsive original song and another glimpse at the duo's uncanny, eclectic taste. I found myself listening far more to the first song, since the shifting, grisly landscape of fuzzed guitars and clapping snare drum entwine with the layered echo of the vocals to create an almost martial landscape of sadness, and I love the longing specter of the guitar break; or where they burst into the blast beat deeper into the bridge with the more impish vocals. All told, it's a fairly unnerving and eccentric footnote to an under appreciated career in the shadows; not as wild or involving as Förlåt or their other full-lengths, but devious enough that their fans will want to experience it.