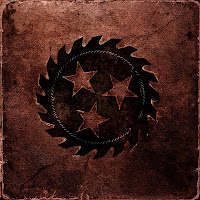 Tennessee's Whitechapel could hardly be called my favorite band in the deathcore spectrum. Not that I spend an inordinate amount of time mining the prospects in that particular strata, but their past output has been more or less a poster child for all the vapid, derivative grooving, shallower hardcore lyrics and uninspired vocal abuse tailor made for little more than teenaged moshing and high school strife. Enter their eponymous fourth full-length Whitechapel, and truth is once being hammered into that age old cliche 'every dog has its day'; for while it still retains some of the traits and flaws that critically marred my appreciation of its forebears, this album prances straight out the gates of the puppy pound and takes a big old, chocolaty dump on my sneaker-boots.

As with their contemporaries like Carnifex or Job For a Cowboy, I got a real sense from this music that Whitechapel felt an aching desire to expand itself into something more progressive. Evolutionary. Epic. And what I'm hearing from this album translates that intent into some admittedly intelligent and well implemented designs that, while not enough to concoct a masterpiece, are enough to quash its predecessors by an order or so of magnitude. Whitechapel is an album of 'moments' more than a fully-fleshed out experience. There were a good number of palm muted, chugging mosh rhythms strafing both the metalcore and djent genres that I felt ruefully unimpressed with, but where these guys deserve some credit is in how they pepper the aggression with ear sweetening leads, progressive metal leanings and what some might dub 'experimentation'. Not that their earlier albums were entirely void of minor escapes and nuances, but the 38 minute duration of this album is incredibly well balanced between the puerile brutality and something...more.

That 'more' is, itself, spread among the stars of possibility. You get some calming pianos in the intro to "Make It Bleed", before some intense surgical thrashing ensues; or strewn throughout "Devoid". There are slight passes at electronica/noise like the intro "(Cult)uralist" and "Section 8". Though a good portion of the album's grooves are directed at the sort of ballistic timekeeping present on the older albums, they are almost constantly including some little tremolo picked fusion guitar melody or other atmospheric distraction to create a depth that otherwise would have been lost upon the concrete foundation. The grooves themselves are often contrasted between Meshuggah-like jerking and the Earth Crisis/Slayer breakdowns that death- and metalcore were partially hatched from, though you can also experience some aggressive post-hardcore dissonance (check out "Section 8" which flirts with all three of these paradigms).

But more, you're getting a similar taste of the highly technical, modern riffing and soloing inherent to the younger Californian brutal death acts, and they've clearly sharpened their individual musicianship. The band has three guitarists, and they USE them, whether in tripling up the rhythms for a fat, pummeling excess or gauging off dual melodies against the third. The single major setback to the album would be the lyrics and vocals. The latter are decent enough when roving thuggishly along a guttural axis, but the various Deicide snarls and tough guy gang shouts used to complement them are less than complimentary. What's worse, while the music is far more cerebral and stimulating than past jaunts, the lyrics are still held back in that 8th grade hardcore mentality, where the world is all out to get you and you must battle it with the cliched script of social antipathy. Lots of 'lies', 'falling', 'bleeding', and 'fuck' as if I were listening to some second rate wrist-cutter metalcore demo from 1994.

I would LOVE for this band to attempt some poetry, using more interesting symbolism, abstraction, surreality, or even just a more technical vocabulary to streamline with their rhythmic chops. I realize that to some degree these guys are writing for their younger audience, who can appreciate a violent lift-up when he or she has been dumped by society or a significant other, or stabbed in the back by a former 'friend', but as the band ages, I think they should spit some more progressive wisdom in that microphone. But beyond this glaring distraction, I must admit that Whitechapel is entertaining more often than not. You could pull 3-4 songs off this thing in almost any order and come out with a far stronger listening session than the older albums combined. I also like the minimal approach to the cover. The information age, dystopic horrors of the past records weren't bad, and sawblades are nothing necessarily novel, but I like that it doesn't show or tell me anything, it just implies progress. It makes me want to dig deeper.

All told, this is a vast improvement in most departments. 2012 and the Metal Blade roster is full of surprises. First that Six Feet Under record, and now this? There are probably some Whitechapel fans who will find this less appealing due to its implicit variation, who don't give a shit about hearing the band challenge itself, they just wanna mosh. Plenty of that here for the dude-bros, but honestly, it's high time to grow up: something this Southern sextet has done nicely with this very album. I'll try not to track dog poo all over the rug on my way out the door.