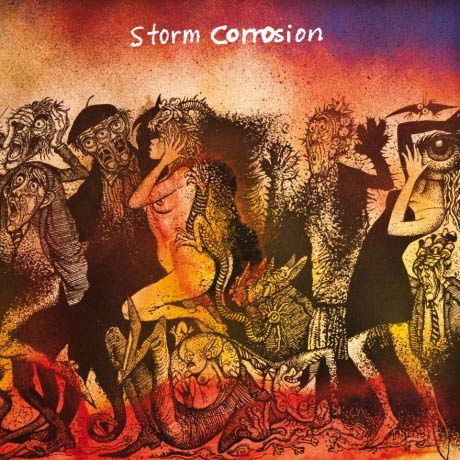 Storm Corrosion is the first collaboration between Mikael Akerfeldt and Steve Wilson where they take equal duties in the band. You've probably already made a decision on whether or not to listen based on that information. Nevertheless, the album has some interesting moments, and will likely satisfy fans of Steve Wilson more so than Akerfeldt.

Coming into the album I was really just hoping for a version of Opeth's Damnation, but with Wilson harmonizing. There are hints of that especially on the first and best song of the album "Drag Ropes." The style here typifies much of the album: slow, mellow prog rock. Light acoustic playing mixes well with strictly high-hat and snare work on the drums. The keyboard generally provides atmosphere, but occasionally step to the forefront to add a pleasant melody to the song.

Wilson and Akerfeldt trade off vocals, and occasionally harmonize. Akerfeldt handles much of the guitar work. This becomes especially apparently, as several of his solos sound straight out of an Opeth acoustic moment.

The downsides here are the usual for these guys: there's a lot of filler. There are a few songs worth checking out, but otherwise the others are forgettable for the most part. Definitely for fans only.

If you're curious, check out "Drag Ropes" or "Lock Howl." I've put both of those in rotation on playlists; I can't say the same for the other songs.