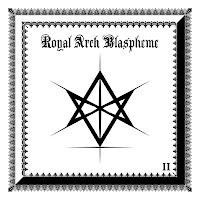 The sheer putrefaction of the first Royal Arch Blaspheme record in 2010 took me completely by surprise, and it was surely one of the better albums that year in terms of a raw black/death hybrid style that shook you straight back to the roots while still seeming strangely 'forward' in its execution. A welcome, primitive paradigm shift in the tides of sacrilege that so corrode the majority of arteries in this field. If the followup suffers from one single setback, is that it settles for much the same formula as the debut. In fact, with minor differences in production, one could probably swap a number of the cuts between the albums and not notice any measurable distinction in their structure.

This is a good and bad thing, dependent upon the listener's expectations. If you were desiring them to one up themselves and produce something filthier, more repugnant, then the cup is more than half empty with II. I'm a little surprised, considering the sinister evolution through the members' respective careers, that they would rest on their laurels here, as rotten and corrupted as those laurels were. On the other hand, if you were immensely satisfied by the eponymous debut, then you're getting more of what you loved, and after a few spins I feel myself falling very much in this category. For that central, insidious repulsion still remains at the heart of the Royal Arch Blaspheme sound: many bands TRY to sound vile and malevolent, but to the New Jersey heretics, it comes all too fucking natural, like that old monstrous, unclean, pest-ridden, shut-in reprobate that darkens your entire neighborhood with his decaying property and overgrown lawn until that one fateful day the paramedics show up and lighten you of the burden.

II is just like that man, if he strolled up to you on the street and started beating on you with a bible covered in his own defecation. Blasphemous, burrowing bass lines soaked in distortion created a tangible wind tunnel of crud over which sits the neanderthal tremolo picking drawn straight from the death metal of antiquity, while the rasp of N. Imperial hails more from a malicious black metal spectrum. The album plays out like a hybrid of old Autopsy, Master and Gelso's other band, Profanatica, its crashing undercurrent of percussion possessed of no further ambition than to drive the riffs into, and then unravel, your intestines. Some might accuse the band of a degree of monotony, but quite a lot of the songs here pursue mildly different aesthetics and atmospheres that churn along to various degrees of success, my favorites being "Five Sacred Wounds" with its writhing coils of agony, "Vama-Marga" and "Psalm 39" with their textured walls of somber mood, and the closer "Broken Word of God" with its overbearing discord and thundering drama.

In the end, does this record stack up to its predecessor? Not precisely, because it seems marginally less volatile, its rabid frothing slightly more controlled, and it lacks that initial sense of shock and awe. That said, they're on an aesthetically level plane which creates a direct continuity between the pair. II is slightly sadder sounding than the debut, even tough the riffs are cast over the same pumping rhythm section, but I still would not want to run into this in some dark alley without mace or at least brass knuckles at my disposal. Like the debut, I recommend you crank this fuck as high as you can get away with. Despite the ensuing threats of eviction, I found that the music functions best at a rousing, voluminous swell that shakes your neighbors to death. You might not live in an apartment, though, in which case you should experience it so loudly that deafened angels start raining on the rooftops.